Eavesdropping on animals via satellite

Technological advances allow biologists to sit in their labs and monitor animal movements. 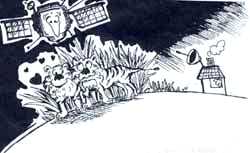 WILDLIFE biologists no longer have to risk life and limb to catch a glimpse of elusive animals eager to protect their privacy. Thanks to technology, biologists can now sit back in the comfort of their offices and track the movements of seals and the rapacious foraging of elephants (Science, Vol 257 No 5075; New Scientist, Vol 136 No 1842).

A group of Cambridge biologists from the Sea Mammal Research Unit has fitted four seals with a device that records their position, depth and the speed at which they are swimming. When they break the surface of the water, the device transmits the information to a satellite, which relays the data to Cambridge via a receiver station in Toulouse, France.

The device weighing 1.5 kg is glued on to the back of the animal's head. Inside the aluminium and polyurethane casing are two units the size of torch batteries. One contains sensors that measure depth and speed and whether the animal is submerged. The other compresses the data into packets that can be relayed to satellites every 40 seconds.

A similar device on an extra-large radio collar has been fitted on an elephant in the forests of Cameroon by Bronx zoo mammalogy curator Fred Koontz. However, scientists found the elephant managed to preserve its privacy. The dense canopy of the rain forest and the pachyderm's huge mass apparently absorb the radio signal, blinding the satellite some 850 km overhead on two out of every three orbits. But scientists working in the wide-open savanna have had a 94 per cent success rate with the tracking device. Since the initial trials, the device has been used on other large mammals, including narwhals and beluga whales.

Researchers say the device will allow biologists to study, from a distance, the behaviour of highly mobile marine animals, elusive forest animals and those such as the savanna elephants that roam over large areas. The vital information that is otherwise difficult to collect will help to design strategies to conserve endangered species.