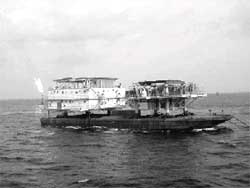 The Nigerian government has directed oil multinationals operating in the country to submit reports on the state of their pipelines and the plans to combat oil pollution. "The move is aimed at ensuring that oil industry operators adopt good practices and comply with the environmental standards," says Atiku Abubakar, the country's vice president. The government's direction, say experts, is a very significant step for the country that has faced ecological degradation for years due to oil exploration activities.

"We have to find a lasting solution to the problem of oil spillage which is very dangerous to our environment," says Abubakar. "The companies should ascertain the viability of all their pipeline networks, replacement plans and their lifespan. The report, thereafter, should be submitted to the federal ministry of environment," says Kabir Said, the country's environment minister. Atiku quoted figures from the Department of Petroleum Resources for oil spills between 1976 and 1996, showing a total of 4,647 spills, discharging 2.4 million barrels of oil. As for the pollution caused due to gas flaring, the department ranks Nigeria number one among all major oil-producing countries of the world. Said claims that the economy of the country has also been adversely affected by the environmental degradation (see Down To Earth , Vol 4, No 14, December 15, 1995).