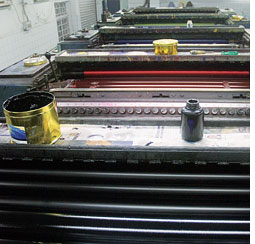 printing ink from vegetable oils is a good replacement for the mineral-based ink used currently. Vegetable oil is environment friendly, claims a study. "It will reduce the organic compounds released during printing," says Santinath Ghosh from the department of Chemical Technology at the Calcutta University.

"Volatile organic compounds leads to formation of smog in printing units, which pose serious health hazards to workers," says Ghosh who led a joint research team from the university and Kolkata-based dic India Limited. dic is the biggest manufacturer of natural ink in the country. The volatile organic compound also affects the ozone layer.

For the study, the team developed several printing inks using vegetable oils such as rapeseed, soybean, palm oil and rice bran, and mixing other chemical ingredients such as phenolic-resins and polyethylene wax paste. Resins were added to the vegetable oil.

Colouring dyes and additives such as aluminium chelate were then added to the mixture. A similar experiment was carried out with mineral oils as well. When the results were compared, it was found that the products using vegetable oils--rice bran oil and palm oil--produced better results in terms of stability, and quality of print.

"Market growth for vegetable inks is quite encouraging. It is a profitable proposition for countries like India," says Ghosh. Although the cost of the ink will be 8-10 per cent more than mineral oil-based product, it will avoid a lot of occupational problems, including improving the health of printing workers, he adds. The study was published in Journal of Oleo Science (Vol 56, No 12).