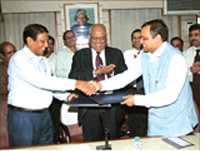 the cement industry has been using blast furnace slag for long. It maintained its eco-friendly reputation when a deal was struck between Steel Authority of India Ltd (sail) and Jaiprakash Associates Ltd (jal). According to the agreement, blast furnace slag (see box Green technology) of the Bhilai steel plant in Chhattisgarh will be used to make cement. With jal having 74 per cent stake in the project, the deal is being considered the largest joint venture sail has ever made with a private company.

According to a Cement Manufacturers' Association (cma) official, one tonne of slag will save around 1.54 tonne of limestone and also reduce other pollutants such as sulphur dioxide and oxides of nitrogen--generated when clinker is made. According to cma statistics of 2006-07, blended cement production constituted around 68 per cent of the total cement production of the country. India manufactures different grades of cement ordinary portland cement (opc), portland pozolona cement or flyash based cement (ppc) and blast furnace slag cement (bfsc). opc, also called grey cement, has 95 per cent clinker and 5 per cent gypsum. ppc and bfsc are called blended cement, in which the clinker percentage varies from 44-80 per cent.