With pollution threatening to smother Egypt, environmental planning is becoming central to the country's economic policies 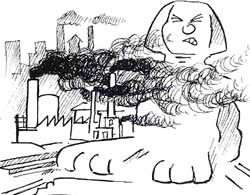 ENVIRONMENTAL planning, generally considered a luxury for developing countries, is becoming an integral part of Egypt's economic strategies. The country's parliament has been debating a comprehensive environment protection law in which stiff prison sentences have been urged for polluters -- even if they are heads of state-owned industries.

Egypt's environment is under strain. A report by the Egyptian Environmental Affairs Agency (EEAA) says the Nile river is highly polluted (Down To Earth, July 15, 1993); urbanisation, salinisation and excessive use of agrochemicals are taking their toll on agricultural land; the lead content in the atmosphere is rising to dangerous levels, and desertification is threatening communities around major cities. EEAA has forwarded a 10-year clean-up plan, entailing an expenditure of $100 million a year.

The government is considering various options, including pricing strategies to discourage the use of heavy pollutants, mandatory environmental feasibility studies for projects and making polluters pay the cost of cleaning up.

Opponents to the EEAA plan, however, have reportedly managed to get the clause on prison sentences for polluters dropped from the draft because otherwise "the entire government will be behind bars". Nonetheless, the EEAA hopes to make the people realise there is no inherent contradiction between protecting the environment and development.