Scientists in the West who have been flush with funds over the years are being shaken out of their smugness as taxpayers demand more tangible results from research efforts. 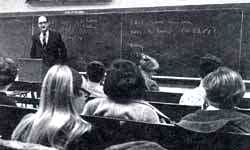 SCIENTIFIC research in America is under pressure to perform better -- economically. Despite the yield of Nobel prizes, "smart" weapons and electronic consumer goods after the government's $76-billion annual investment in scientific research, the US has been unable to stop countries like Japan from obtaining the commercial gains. Lasers and video cassette recorders that were invented in the US have been commercially exploited by the Japanese. The US government is now rethinking budgetary allocations for science research to move from basic research to applied research. This has sparked off a debate, with those opposed to the cuts contending there will be no new ideas to develop into practical benefits after a few years.

The contributions of science during World War II resulted in huge amounts of money being pumped in to ensure that research would drum up America's security and standard of living. But now, after the break-up of the Soviet Union and the emergence of a single Europe, the threat the deficit-plagued US faces is economic, and the exalted goals are being reassessed.

Researchers who have generally been spared budget cuts now find themselves vulnerable to the axe. On June 17, the US House of Representatives cancelled the Superconducting Super Collider, warning the nation could not afford such costly and specialised projects. Next, a House appropriations subcommittee voted to keep the National Science Foundation (NSF) budget for 1993 at $1.9 billion instead of increasing it by 18 per cent as sought by the administration. The NSF was directed by the Senate committee funding it to "take a more activist role in transferring the results of basic research...into the marketplace."

The subcommittee also cut $200 million from National Aeronautics and Space Administration (NASA) science projects and sanctioned only $1.7 billion for the space station project instead of the $2.25 billion requested. Another subcommittee gave the National Institutes of Health (NIH) an increase of only 3.3 per cent, about $200,000 less than what the Administration wanted. Congress had previously always added substantially to NIH's budget. Now, the NIH is preparing a grand strategic plan that cites the major goal of its $10 billion budget is "to enhance the nation's economic well-being."

House science committee chairman George Brown has stated that 1993 will be science's "most painful year," but analysts at the Congressional Budget Office indicate the worst is yet to come. For now, the cuts are being blamed on the Budget Enforcement Act sets strict limits on several budget categories and forbids the shifting of funds from one category to the other.

In September, the House passed a bill granting $2.2 billion for research in advanced ceramics, robotics and new manufacturing technologies. In the pipeline are a civilian technology agency to focus on applied research and a corporation to fund companies commercialising new technologies.

This year, analysts and congressional aides say, the domestic discretionary budget -- a $500 billion category that funds civilian R&D and a range of other government programmes, including environmental protection and social welfare -- is so low Congress will have to trim all domestic programmes by 1.3 per cent from 1992 levels to satisfy the budget law. With the US economy stagnating, Congress is hardly keen to boost science spending at the expense of welfare programmes.

Even the White House is taking a pro-science application stance after years of ideological opposition to industrial policy. President George Bush admitted in September that to win the present economic competition, "we must have processes that can speed the route from the laboratory to the marketplace." Presidential contender Bill Clinton, too, has promised to speed up the new trend if elected in November.

The budgetary restraints cited for the shift in science spending are only half the story. NIH director Bernadine P Healy says some of the blame for not getting value for research work goes to scientists themselves. "The academic community, with its ivory-tower mindset, thought science was an end in itself," said Healy. She said scientists have lost sight of the premise that basic research should be targeted to tangible goals.

The new trend is being translated into action. An engineer at the University of California at Berkeley is linking superconductors and computer chips to speed up access to computer memories. At the Massachusetts Institute of Technology, the schools of management and engineering are together finding methods to bring manufacturing expertise into the boardroom.

National Academy of Sciences' president Frank Press has called for civilian R&D to get a major portion of savings in the defence budget, arguing the government has to support research to make any headway in the increasing economic competition. He contends what is lacking is a policy for science and technology, especially with regard to potential economic payoffs.

Scientists are complaining of short funds, but few members of Congress are sympathetic. Brown says the belief that money put into science will automatically result in benefits is not true. In Britain too, the priorities are being re-examined, and by early next year, the government will put out a white paper on science and technology. Minister of science William Waldegrave said besides organisational matters, he hoped the document would "discuss ideas about the exploitation of science and the application of technology."

Whether or not the new approach solves some of the economic woes remains to be seen. But if University of Maryland physicist Robert L Park is to be believed, the move may turn out to be rather ironic because the Japanese have concluded that they are just not doing enough basic research.