Economy no longer monsoon dependant, but farmers are

Less rain is bad news for small farmers, not the economy 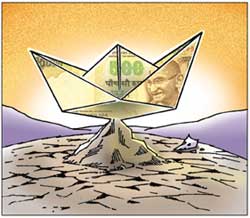 The India Meteorological Department (imd) has predicted that the southwest monsoon for 2006 will be below normal. The June-September rainfall is estimated at about 830 millimetres (mm), instead of the normal 890 mm.

imd also says there is a chance that the rainfall will be below 800 mm. If that happens, the monsoon will be classified as "deficient". Deficient rainfall will affect the farmers. Though kharif crops (paddy, groundnut, bajra ) will mainly be affected, even rabi crops will have less residual moisture. About 55 per cent of Indian households depend on agriculture .

Despite the shortfall predicted, analysts are projecting a 7.5-8 per cent growth in gdp for 2006-2007. Reason: now, gdp growth is largely dependent on the services sector and industry rather than on agriculture. The contribution of agriculture to gdp has declined from almost 50 per cent in the 1950s to 33 per cent in 1991, 25 per cent in 2000 and is now down to 21 per cent.

Experts say lesser rainfall will not affect total agricultural production. This is because the top five food grain producing states (including Punjab, Haryana and Uttar Pradesh) which contribute more than 60 per cent of staple food, have irrigation facilities to maintain productivity.

But marginal and small farmers, who cultivate mainly for subsistence, will be seriously affected, says Jayashree Sengupta, developmental economist at the Observer Research Foundation, Delhi. There are about 115 million farm households with an average holding size of only 1.4 hectares. "Since in such cases agriculture is barely profitable, a slight decline in productivity would mean losses for the farmers," says Devinder Sharma, a food and livelihood expert.

Economists say that the Indian economy is far more resilient to the vagaries of the monsoons than it ever was. This may be true if we look at a gdp growth of 7-8 per cent, which can be maintained by services and industry sector. But the economy still needs support from the agriculture sector, which does better if the monsoon is good. For instance, a strong growth in services and the manufacturing sector, supported by good agriculture (growth rate of 16.9) led to a gdp growth of 10.4 per cent in the third quarter of 2004. But 2002 witnessed a growth rate of only 1.9 as agriculture and allied sectors showed a negative growth rate of 9.6.

"The service and industry sector is driving the per capita income, but if we look at those dependent on agriculture, income will be affected (by deficient monsoon)," says Sengupta.

Experts say that India needs to move beyond its dependency on monsoon, especially for the small and marginal farmers whose numbers are considerable. This can only be achieved by bringing more area under irrigation and by better water management. Such an approach would also make better economic sense.