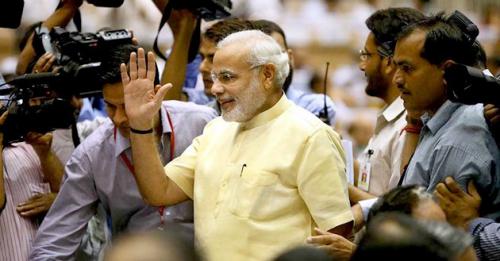 Hardly a month before the Union budget, Prime Minister Narendra Modi, in his post-demonetisation public address on new year’s eve, has announced major economic schemes. This declaration points towards certain nervousness on the fallouts of demonetisation, especially keeping in mind the upcoming Uttar Pradesh state elections. In some ways, PM’s speech has left the Union Budget 2017-18 redundant.

The crackdown on black money has led to a breakdown of rural and informal economy of the country. His new schemes seem to make an attempt to restore the rural economy and agriculture, which has been badly hit. The Prime Minister has announced incentives to increase rural consumption to push the country’s GDP.

As Indians stand in line for their own money, the Prime Minister hopes to convince citizens that the continued struggle will benefit them in the future through his new schemes.

Here are some highlights from the PM’s speech:

-PM has said that Rs 6,000 will be credited to accounts of all pregnant women to provide for delivery, vaccination and nutritious meals. The scheme will be implemented country-wide. This is an upgradation as the scheme allots Rs 4,000 to pregnant women in 54 districts of the country.

- He announced several tax benefits for those interested in taking home loans. As per the PM, people taking housing loan up to Rs 9 lakhs will get relief of 4 per cent and a three-per cent-relief on loans worth Rs 12 lakh and Rs 2 lakh.

- Modi added that generally, banks lower taxation on deposits when the deposit amount with them increases. He announced that senior citizens will get 8 per cent interest on deposits up to Rs 7.5 lakh. It is noteworthy that this is the current rate of interest on senior citizen account deposits.

- The PM asked for a serious discussion on the issue of combined elections in states as well as the Centre. However, he did not mention what will be the role of his government in initiating this discussion.

- He raised the credit guarantee for Micro, Small and Medium enterprises (MSME) from Rs 1 crore to Rs 2 crores, adding that loans from non-banking financial companies will also be covered in this. MSME sector employs 50 per cent of India’s workforce. The sector has borne the brunt of demonesation.

- In his speech, the PM suggested productive Rabi season and good harvest. But data doesn’t seem to support his claim. As per Down To Earth’s analysis, sowing reduced which led to the announcement of importing wheat.

- Modi announced interest-free loans for farmers who had taken loan from district cooperative banks during the initial 60 days of the Rabi season.

- The PM declared rural housing loans up to Rs 2 lakhs with interest subvention of three per cent. The loan will not only be for construction of new houses but also for expansion of current housing.

- The PM also announced a seemingly overambitious plan of expanding the reach of the recently inaugurated Pradhan Mantri Awas Yojana by 33 per cent. The current target is to construct 3. 3 million rural houses by end of financial year, March 2017. Interestingly, he had inaugurated this scheme in November, 2016.

- The PM said that National Bank for Agriculture and Rural Development (NABARD) will disburse farm loans worth Rs 20,000 crore.

- Modi, in his speech, said that 300 million active Kisan Credit Cards (KCC) will be upgraded to RuPay credit cards. The total number of KCCs issued is around 750 million.