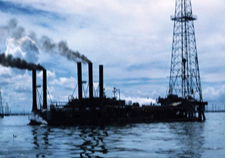 Artists, scientists, writers, teachers and entrepreneurs in Venezuela's northwestern state of Zulia have set up a foundation to sponsor an eco-tourism museum. At the heart of their endeavour is Maracaibo lake, the largest in South America, covering more than 12,000 sq km.

The lake was the epicentre of the region's most productive oil basin during the 20th century. "But it was 2004 when water lentils covered part of the surface, with its green layer and foul odour that people who had lived along the shore for many generations began to feel that there was a problem at hand," artist La Bermdez, who is also the spokesperson for the project, told Tierramrica, a Latin American web magazine. There will be an international contest to design a 'palafito', a stilt house in homage to the ancestral homes on Maracaibo, which will serve as a tourism and environmental centre, she said.