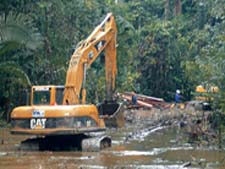 The Ecuadorian government has decided not to tap a major oil field in the Amazonian rainforest, and asked the international community to compensate it for the sacrifice. The government's demand is in response to opposition by environmental and indigenous groups against oil development in the rainforest's Yasuni National Park.

In a statement, the country's energy minister Alberto Acosta said the government will leave the oil reserves undisturbed for another one year and see if the international community can compensate the country with half of the forecasted lost revenues. The government has pegged the compensation figure at us $350 million per year.

The Yasuni National Park has three untapped oil fields--Ishpingo, Tiputini and Tambococha--which, according to government estimates, contain 900 million to 1,000 million barrels of oil.

According to the Ecuadorian government, oil revenue is necessary to meet its development needs. Half of the country's population lives below the poverty line.

Amazonian countries have long been demanding compensation for keeping the Amazonian forests intact.