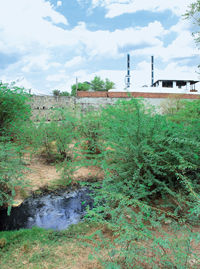 The moniker 'textile city' is apt for Bhilwara. After all, it produces 75 per cent of the country's textile. But there is a dark side to its sheen. The industry's poor effluent management system has long poisoned the area's groundwater affecting agricultural lands and people's health. The pollution continues unabated even after pollution control authorities set a zero-discharge norm for the units and the government offered subsidies for effluent plants. Experts fear it will soon reach the city's centre and poison groundwater meant for domestic purposes.

There are about 500 synthetic textile units in outskirts of Bhilwara on Chittorgarh, Gangapur and Mandal roads. Most units are involved in spinning and weaving, apart from the 20 major textile processing units, which are the main water guzzlers. According to Mewar Chamber of Commerce and Industry (mcci) data, the 500 units require 24.80 million litres of water per day (mld).The 20 processing units use 80 per cent of this (19.34 mld).
A 2004 study by the state public health engineering department found that most open wells in villages near the Kothari river that flowed beside the industrial belt had chromium, lead, iron, zinc and sodium above the norms set by the Bureau of Indian Standards. Lead is especially injurious to the brain and nervous system of developing children. The water also had high levels of chlorides making it hard. These chemicals, the study found, were similar to those found in textile unit's waste.
Each unit has an effluent treatment plant but they had long been dumping untreated and partially treated effluents in drains that emptied in the nearby Kothari river. Units excuse themselves citing additional costs. "Treating effluent is expensive. The company spends Rs 4.5 lakh per day for the three stages of effluent treatment," said an engineer from the Suzuki Synthetic unit.

But after stiff resistance from villagers, in December 2005, the Rajasthan Pollution Control Board ordered the textile mills to operate as zero discharge units. Since then, units have been growing eucalyptus trees in 2-5 hectares of agriculture land in its premises, using wastewater for irrigation. "They now inject untreated wastewater in the ground," said Kalu Ram Pareek, an activist from Bhilwara district's Pur village. Agricultural activity in 8-10 other villages located downstream of the btm processing unit on Gangapur road has reached a standstill. Even the air smells foul. Villagers again protested in July 2006. "But the pollution control board took no steps claiming the effluents were being used for irrigation and not being drained in nullahs," said Pareek. 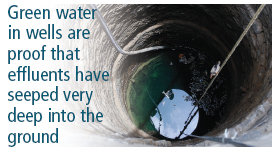 When the Down To Earth correspondent visited the plant in July 2007, he found untreated and partially treated effluents from the factory either flowing into the nullah that joins the Kothari river, or percolating in the sandy riverbed. Villages downstream had been affected. "Water in open wells in these villages has turned green and water from handpumps smells and tastes of chemicals. Even the air smells of chemicals," said Badri of Raningpura village. Agricultural land was unfit with land prices having dropped from Rs 1 lakh per bigha (1 bigha=0.25 hectare) to Rs 20,000 per bigha. Even cattle could not drink the water. Villagers complain of health problems like stomach disorders, gastroenteritis and skin diseases.

Experts fear depletion of the areas groundwater. "About 80 per cent of the households in the city depend on groundwater. Soon the impact of groundwater pollution will be felt in the heart of the city," said D Derashri, secretary of Pani Wale, a Bhilwara-based ngo, and former engineer with the irrigation department. MK Jain, executive officer of mcci, blamed the government: "The government only offers short-term solutions, like installing reverse osmosis plants at 50 per cent government subsidy. Yet, the government always shies away from paying the subsidy amount of Rs 20 crore," he said.