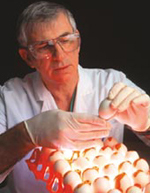 The Soil Association (sa), an organic farming group, has found that up to 20 million eggs sold in the uk each week could contain traces of a potentially dangerous drug. In tests, nearly one in eight egg samples contained residues of the antibiotic lasalocid, harmful to people with heart ailments. Lasalocid is usually added to chicken feed as a preventive for gut infections. It is not meant to be fed to laying hens.

While stating the findings aren't an immediate health concern, the uk Food Standards Agency has criticised the poultry industry. For its part, industry claims that recent changes in the way the drug is produced should prevent it from reaching egg-laying hens in the future.

Interestingly, sa's warning comes even as a group of eu scientists are meeting in Brussels, Belgium, to discuss a legal maximum residue limit for using lasalocid in animal feed.