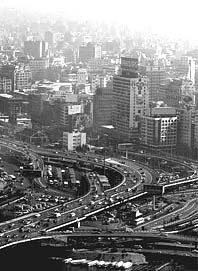 Dense smog engulfed Cairo during the last week of November. Exhaust fumes from vehicles, smouldering wastes and industrial emissions -- all contribute to air pollution in the densely populated city. "Black cloud returns to Cairo skies," said the headline in state-owned Al-Akhbar daily, referring to the acrid smog that choked the capital for several weeks in October and November.

Magdi Allam, an environment ministry spokesperson, confirmed that there had been an increase in dust particles, smoke and gases in the air over Cairo. In some areas, it is almost double or three times the amount that allowed under international regulations.

"The city is completely covered in grey smog. My eyes are itchy, my throat is dry and the air has a peculiar smell," said Nathalie Stragalis, a resident of fashionable Zamalek. "Many people have complained of sore throats, flu-like symptoms and acute headaches. There is no doubt that the increased presence of smog in the air has increased respiratory problems in normal, healthy people," said a Cairo-based doctor Antoun Sayegh.

"The smog inflames eyes, the throat and chest. This can lead to bronchitis. It facilitates the spread of viruses by lessening immunity. It exacerbates the condition of people with allergies or asthma and increases the symptoms of common colds," Sayegh added.