EIAs by registered consultants only 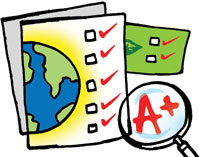 INSTANCES of revoked environmental clearances have cast doubts on the Environmental Impact Assessments (EIA) being carried out across the coutry.

For example, clearances of Srikakulam power plant in Andhra Pradesh and the Hankol power plant in Karnataka were cancelled on July 15 and April 16, respectively.

The Quality Council of India (QCI) along with the National Accreditation Board for Education and Training (NABET) earlier this year unveiled a programme for accreditation of EIA consultant organisations. But the accreditation process that was to become mandatory in June will now come into force from January 2011. After that the Ministry of Environment and Forests will accept only EIAs conducted by accredited consultants.

The deadline has been extended to get maximum participation and registration from consultants, officials at QCI said. “It was felt that the time given to consultant organisations to upgrade their staff, laboratory facilities and other requirements for accreditation was insufficient,” said Vipin Sahni, director NABET and National Board for Quality Promotion in QCI. Till July 15, 230-odd companies had applied for accreditation.

As per QCI reports, the way in which a proposed industrial project’s impact on the environment is assessed is far from professional; consultants do not have adequate understanding of the way to do EIAs, the inputs are of poor quality and reports are mostly copy-cut-paste jobs. According to Sahni, accreditation will help regulate quality and make consultants accountable. It will also provide listings of the consultant companies.

Until now there is little data available on consulting companies. “When research for accreditation began last year we were told there are 500 companies, some said there were more than 1,500,” said an accreditation consultant at QCI. He explained often individuals registered as companies and did EIAs based on secondary or tertiary data.

Somesh Rastogi of Effikazy Consulting said QCI needs to set a few things in order; there is no clarity on pollutant calculations. Consultants also feel that the new regulations will increase the cost of EIAs. “We were told not to charge more than Rs 30 lakh, but that is not possible with the new QCI parameters,” said Raj Kumar Samuel of Huber Enviro Care System, an EIA consultant firm in Chennai. Earlier, for the baseline monitoring of proposed projects consultants were required to study six parameters.

Now there are 12, Kumar explained. “What can we do? We will have to charge our clients, who in all likelihood will avoid getting EIAs conducted,” Kumar cautioned. Following the global recession, project proponents have been investing in or showing smaller holdings to dodge conducting an EIA. Rules say that any infrastructure project smaller than 20,000 square metre does not require an EIA.

EIAs cannot be completely objective since they are funded by companies, but there is no doubting QCI registration will improve their quality, Rastogi said.