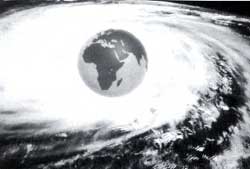 FROM Einstein's equations of general relativity, Austrian physicists Joseph Lense and Hans Thirring derived in 1918 that an object that spins also twists the fabric of space-time around it. The Lense-Thirring effect is so small, however, that it has been hard to measure. An international team of Italian, Spanish and Greek-American scientists reported in March this year the most precise detection of the Lense-Thirring effect yet. In an elegant approach, they measured how the rotation of Earth distorted space-time and thus altered the paths of two orbiting satellites.

Scientists have known for years where to look for the effect. Calculations show that the rotation of the Sun shifts Mercury's orbit six metres every year. Unfortunately, that is too small to be detected by current technology. Massive objects such as black holes should also demonstrate the effect. Indeed, last year astronomers determined that a disk of gas spiralling into rapidly-spinning black holes or neuron stars can precess, in line with the Lense-Thirring effect. Nevertheless, researchers of such observational methods concede there is at least a 400 per cent error range.

The recent measurements of the satellites, however, are within about 20 per cent of the prediction. The team, lee by Ignazio Ciufolini of the Nations Research Council of Italy and of Romi University, worked with prior lase measurements of the orbits of two satellites originally designed to measure thi size and shape of the Earth Lase Geodynamics Satellite or LAGKOS launched in 1976, and LAGEOS n launched in 1992. The laser pulse determined the positions of the satellite with uncertainties of less than one cin The team found that the satellites trajectories shifted two metres every year because of the spinning Earth.

Crucial to the measurement was cancelling ordinary gravity perturba tions that masked the relativistic effect. To do that, the workers relied on th Earth gravitational model (EGM-96) Developed by several us institutions, the model estimates the shape and gravitational field of Earth based on orbital data of spacecraft collected over four years. "The experiment would not have been successful without the data pro vided by the latest Earth model," say team member Juan Perez-Mercader o the Laboratory of Astrophysics and Fundamental Physics (LAEFF) in Madrid Spain. The other researchers are Eduardo Fernandes-Vieira, also from the LAEFF, Federico Chieppa of the University of Rome and Erricos Pavlis of the University of Maryland, USA.

One interesting fact about the work is the cost. "Essentially we did not spend even one cent, excepting out salaries, travel, phone calls and the computer calculations," says Ciufolini. Perez-Mercader explains that the work was mainly coordinated through the Internet, a virtual collaboration among members who also share Mediterranean origin - they call themselves ulivi (olives) and aceitunos (olive trees).

Ciufolini, who published previous but less accurate measurements in 1996, is convinced that his team's approach can be improved to get the error down to about two per cent. The key would be a soccer ball-size satellite that he calls I.ARES, or Laser Relativity Satellite, which could be built for less than US $10 million. It would contain only mirrors to reflect laser pulses. The orbit of LARES, combined with that of LAGEOS, could cancel almost all the gravity perturbations.

The expense stands in stark contrast to that of the Gravity Probe B, scheduled for launch in 2000. Being built by Stanford University and NASA, the probe has taken more than 25 years to develop and will cost about us $300 million. The satellite, which will follow a polar orbit, will rely on four gyroscopes the size of beans. In principle, after about a year, the researchers would be able to detect the Lense-Thirring shift in the orientation of the gyroscopes of 42 milliarc seconds, 0.000012 degree, with an error of one per cent. That accuracy, Ciufolini calculates, corresponds to less than 10'" metre - smaller than the radius of a hydrogen atom.

Francis Everitt, one of the main Gravity Probe B researchers, noted that some scepticism about the laser measurement of LAGEOS satellite exists. "I know there is some disagreement among experts in the data-reduction processing involved in these results," Everitt says. "And I would certainly discourage any different experiment from the way we are doing it. But I think that the observation of satellites may work if the results are confirmed."

Ciufolini and his colleagues do not see Gravity Probe B as competition, but rather as a complement. Although the design philosophies differ, they have the same goal. "Our results are good news for everybody," says Perez-Mercader. "Probe B will check the effect in a different way, and that is how science advances."