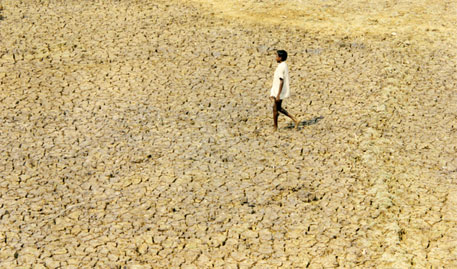 The “boy” has arrived, throwing economic tantrums across the world. From Peru to India, from the power corridors of the White House to the outgoing Indian prime minister's office, the fear of the “Christ Child” or El Nino hangs heavy.

The news of this weather condition that spells widespread drought and crop loss in Asia, Australia and America comes at a time when the cost of food has touched a 10 month high (till March) in the world. Economists across the world fear that El Nino will lead to crop loss and reduced production, thus further increasing food prices.

In India, that saw a similar weather condition coinciding with a severe drought in 2009, it is emerging as a big challenge for the next government slated to take over in June.

In the past fortnight, weather forecasters from the US and  Australia's Bureau of Meteorology have said the chances of the dreaded weather condition hitting in 2014 up to 70 per cent.

There is already a flutter in the global agricultural produce market. Global cocoa prices have hit a three year high because of fear of El Nino hitting crops. Australia, which is already experiencing a severe drought, which is forcing its livestock rearer to take to large-scale culling to cut down fodder and feed demands, has issued warning of a global shortage of beef. Australia is the world's third biggest beef exporter. According to news agency Reuters, there are world-wide concerns over reduced wheat, sugar and cotton production, particularly in Australia.

In Indonesia, the weather condition usually means less rainfall in palm plantation areas, thus negatively impacting oil production. This will lead to increase in global palm oil prices. Similarly, it could impact paddy cultivation in Thailand by further aggravating the usual drought condition in March-April. In Asia, that grows more than 90 per cent of the world's rice, El Nino is feared for its negative impacts on production. It is also a global concern as most of world's poor survive on rice.

According to the Food Price Index of the Food and Agriculture Organisation (FAO) of the United Nations, food prices are already hitting the highest since almost a year. In the index, the price rise of sugar is a typical example of how uncertainty over weather conditions will impact the overall prices of food items.

Sugar prices recorded a 7.9 per cent rise, the highest among the five food items included in the index. The overall food price increase has been 2.3 per cent in the past one month. The index tracks price rise every month. FAO has attributed the price rise to low production of sugarcane due to drought and the fear of the El Nino disrupting the future crops in Thailand and Brazil. El Nino in 2009 turned India's monsoon patchy, leading to the worst drought in nearly four decades and helping push global sugar prices to their highest in nearly 30 years.

The El Nino Commission of Peru, the first country from where symptoms of El Nino are picked up, has already rung the alarm bell for its fishmeal industry. “Temperatures in the Pacific are expected to rise two to three degrees Celsius above normal this year. We expect anchovy resources to move toward southern Peru," German Vasquez, president of the commission, told media persons in the first week of April. Being a top exporter of fishmeal, the impact of El Nino on Peru's main business would have widespread ramifications on prices.

Why Indian government is mum
In India, due to the ongoing elections to the country's Parliament, there government response to the impending weather condition is subdued. Monsoon is always a sensitive political issue given its centrality to the country's agrarian character. In India, it coincided with droughts in 2002, 2004 and 2009. In 2009, it led to high food inflation which in many ways contributed to the current anti-incumbency. Government resorted to clampdown on farm exports.

Crisil, a rating agency, warns what can be expected. “If however, the monsoon were to get adversely affected this year, India’s economy could grow by 5.2 per cent in 2014-15 – much lower than our current forecast of 6 per cent. In addition, CPI inflation, with nearly 50 per cent weight of agriculture-related articles, will rise above the current forecast of 8 per cent in 2014-15.” “In particular, the occurrence of an El Niño is said to cause rainfall deficiency in north-west and central India, and excess rainfall in the northeast region. North-west and central India together contribute 67 per cent of the country’s agriculture output while the north-east and east regions together contribute around 13 per cent. Deficient monsoons will, therefore, not only pull down GDP growth but could also stoke food inflation,” says an assessment of Crisil on impacts of the weather condition on India's agriculture and the economy.

The Centre's response may be weak, but in the corridors of the agriculture ministry, there are conversations going on about the El Nino. In February, the ministry called state agriculture officials to start preparation for the summer-monsoon crops or the kharif crop. Sensing the certainty of various weather forecasting as well of India's own weather forecasters, officials did talk about a contingency plan for the summer crop. To fight drought-like conditions, government has this normal practice of preparing contingency plan for each district. There is already a template available for what to do in each district in case of erratic weather or drought. But it is unusual to kick start the process at this point of time.

“The contingency plans for 449 districts in 23 States have already been prepared,” J S Sandhu, agriculture commissioner, told media persons after the meeting on February 26. States have agreed to start procuring seeds for short-duration crops for distribution to farmers. There is already a proposal to create community nurseries of rice to fight El Nino-driven drought or dry spell. However, the agriculture minister, Sharad Pawar, in an official statement said: “The impact would be unlikely to be severe on the country's foodgrain production in 2014-15.” “We had seen a similar situation in 2009. It will not be as severe as to affect foodgrain production. We are keeping a close watch,” said Pawar.

In India there is no official forecast on El Nino. The first monsoon forecast from the India Meteorological Department (IMD) is expected towards end week of April. But IMD's regional climate centre in Pune has said that El Nino may strike around July, the crucial month for India's rain-fed agriculture. By this month sowing is almost over in large parts of the country. Usually a dry spell in July has been historically devastating for the farmers. In an interview to the Economic Times on March 24, Laxman Singh Rathore, director-general, IMD, said: "It is in the US and Australian interests that agri-commodities and stock market in India come down. They are spreading rumours. People will start hoarding and might start creating artificial scarcity of commodities. Don't heed their advice."

This June, Indians will not only wait for the monsoon but also put the new government under intense scrutiny on how it handles the El Nino. It is popularly said that monsoon is the chief finance minister of India. This time it has a tough contest in hand.