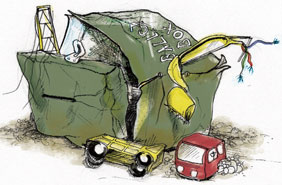 FEBRUARY 7 was supposed to be an eventful day in Korchi tehsil of Maharashtra’s Gadchiroli district considering it was the day for filing nominations for zilla parishad elections. But not a single person turned up. The reason was a poll boycott to protest the proposed iron mining in the Naxalite-affected region. Residents, majority of them are farmers, say the mining will affect their livelihood and the environment. The administration, however, attributes the absence of nominations to a recent Naxalite-related murder in another tehsil.

The residents have been protesting since 2007, but the administration has remained mum. The people first came to know about the mining proposal when residents of the Jhendepar gram panchayat, comprising Jhendepar, Sohle and Nandali villages, noticed massive tree-felling in their forests. Korchi sarpanch Dariav Gawade says, “The residents wrote to the tehsildar, asking him to stop the work. It turned out that neither the tehsildar nor the forest department were aware of who was undertaking the work and why.” When the administration failed to act, the villagers put a stop to work by barring entry of the tree-fellers.

Things were quiet after that till August last year. A newspaper advertisement announced that a public hearing will be held on September 9 for a 65-hectare (ha) iron-ore mine by a company called Ajanta Minerals. “A thick English book (the environment impact assessment or EIA) was given to us that no one could read. We had a month’s time to understand it and then attend the hearing in Gadchiroli, which is 120 km away,” says Gawade.

The announcement sparked off protests. “The mine’s impact area was large. The site comprises a buffer zone of 10 km radius in which 58 villages are located,” says Nizamshah Katenge, resident of village Salhe and a health rights activist. The site is a part of the 365 ha of land claimed by village Sohle under community forest rights. The village has been granted only 20 ha, adds Katenge.

In view of the complications involved, a delegation of citizens requested the collector to postpone the hearing till the implications of the proposed mining could be studied. It was also suggested that the hearing should be held in Korchi so that more people could attend it, says Katenge. But the administration did not accept the requests. Collector Abhishek Krishna says the hearing could not be postponed “at the eleventh hour”, adding: “It was not possible to hold it in Korchi because it was rainy season and there were security issues because of presence of Naxalites.” Finally, only a few from Korchi attended the hearing, but they staged a protest. It ended inconclusively. Ajanta Minerals distributed a pamphlet saying an additional 460 ha was being leased in two villages for mines to several companies, including Tata Steel and Dhariwal Infra Pvt Ltd. “This meant death of the entire tehsil,” says Korchi Taluka Sarpanch Sanghatana president Nandkishore Vairagade. Ajanta Minerals alone will impact more than one third of the 130 villages in the tehsil. If more companies are allowed, the remaining villages will also be affected, he adds.

Following the pamphlet release, 60 gram sabhas in Korchi passed resolutions in October seeking cancellation of mining. The resolutions were sent to the chief minister, state environment minister, tribal development minister and several other ministers, but there was no response. In November, 13,000 residents held a morcha demanding cancellation of all iron-ore projects. The administration remained unresponsive. Following repeated failure of the administration to respond to public demands, people decided to boycott the elections, says Anandrao Chaube, taluka president of BJP. The only nominations that were filed were by independent candidates who were not aware of the situation. “They too withdrew after they learnt about the collective decision,” he adds.

The total boycott has come as an embarrassment to the administration, which is planning to reschedule the elections. “The residents of Sohle had withdrawn their decision to boycott the elections at a meeting in January,” says collector Krishna. But the residents disagree. “During the meeting, we told the collector we will consider withdrawing only if a written assurance is given that the mining leases will be cancelled. But the collector refused,” says sarpanch Gawde. Krishna says there was no need to boycott elections since no lease has been given. “It is true no lease has been given but proposals are in the offing,” says Vairagade. “We want the government to cancel all the proposed mining leases. Unless this demand is met, no elections will be held. We do not need a government that does not listen to us,” he adds.