REVA leads the charge for electric vehicles in India 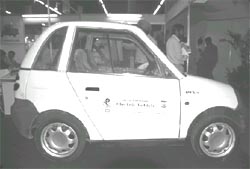 revolutionary Electric Vehicle Alternative, or reva, the brainchild of Chetan Maini, managing director of Bangalore-based Maini group of companies, is not another smoke belching fossil fuel guzzler. The noiseless piece of machinery, first developed in 1996, is electrically driven.

reva , India's first electric car, has been much delayed in its launch. But now the manufacturers are upbeat about the car and have finally brought it out for sale at Bangalore. They are also going to launch modified versions of the car, targeting different niches of consumers, such as taxi operators, resorts and large corporations. The company has appointed 90 dealers across the country, out of which 40 are based in Bangalore.

But will reva catch the customer's eye, especially, considering it's tagged at about Rs 2 lakh? Vijay Chandy, senior vice president at Reva Electric Car Company ( recc ), says: "We have launched the car in Bangalore. Next we will roll it out in Chennai, Mysore, Hyderabad and Coimbatore in a phased manner. We are initially targeting the smaller towns and planning to make it a success story there before marketing it across the nation, which is likely to take place in the first quarter of 2002."

Produced under a joint venture between the Mainis and Amerigon, a us -based company, the car boasts of a running cost of Rs 0.40 per km. The Maini group, which controls 67 per cent stake in recc , has invested Rs 80 crore. With an installed capacity of 10,000 units per annum, the company expects to break even by selling a mere 3,000 units of reva per annum. The company expects to sell 1,500 units in the first year of operation and later hike production to 3,000 units in the second year. The company chairperson Sudarshan Maini espouses plans to export the car to England as well.

The two-door hatchback can carry two adults and two children or a payload of 227 kg and achieve a top speed of 65 kmph. One full charge of the battery lasts for 80 km. Eight six-volt tubular lead acid batteries, especially developed for reva 's power pack, have a life cycle of approximately 40,000 km.
The 48 volt, 200 ampere hour tubular lead acid batteries pack is neatly tucked below the seats. With a six-hour charge, one can drive the car to 80 km. The battery pack is charged through the usual 15-ampere socket found in each household. A 'fuel meter', or the state of charge meter, indicates how charged the batteries are. Lights glow up to inform the driver that the car needs to be charged. reva has two computers on-board -- an energy management system ( ems ) and the controller -- placed below the seats. The ems performs five key functions that help improve reva 's efficiency.

Another unique system protected by Amerigon patents to be used in reva is the cooling, heating and ventilating system called 'climate control seats' ( ccs ). The system ventilates the seat to increase occupant comfort in different weather conditions. The ccs system has a solid-state heat pump and consumes less than 10 per cent of the energy consumed by the conventional automobile air-conditioners.
So why will a consumer, used to zipping in a car at 100 km for hours settle for a battery-driven car that'll cruise at a maximum of 65 kmph and go just 80 kilometres before the battery gets drained?

According to a market study by the Maini Group, regular commuters travel distances of about 30-40 km in a day in India, making reva just the right car for daily commuting. Coupled with the fact that one need not undergo the trouble of filling fuel , or servicing, or for that matter, having to switch gears so often, the manufacturers believe it could become not only the first electric vehicle . of India but the first electric vehicle to make it big.

reva 's body is made of Acrylonitrile Butadiene Styrene ( abs ) polymer, a new age material that is easier to manage back into shape in case of dents. The suspension consists of McPherson struts in front and coil spring at the rear, standard componenets of the other fossil fuel-based cars also.The usual four or five gear system is replaced by four modes, referred to as forward, reverse, neutral and economy.


reva has been tested extensively at the Automobile Research Association of India ( arai ), Pune, and was certified for road worthiness. reva has further undergone extensive road testing in usa . Since the introduction of the prototypes, reva has completed about 1,000,000 km of extensive road tests.

But the real test lies in surviving the market competition. The skewed economics of importing green technology in India leaves reva at a disadvantage. According to a report by the manufacturers, catalytic converters and cng kits attract an import duty of five per cent. However, on components like the motor controller, battery pack used in electric vehicles, the import duty range on components is from 33 to 46 per cent.