At the genetic level 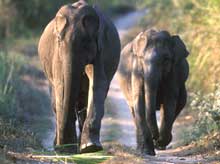 for long, the South Indian elephant population ranging the forests has been treated as one collective. Now, studies conducted by researchers at the Indian Institute of Science have shown that there exists a genetic difference between the elephants in the Nilgiri mountain range and those free-ranging in the Anamalai and Periyar forest regions.Studies conducted by T N C Vidya and Raman Sukumar, besides others, show that the 40-kilometre Palaghat gap between Nilgiri and the other two ranges may have worked as a bio-geographic barrier, leading to the change in genetic structure of the two sets of elephants in the wild. "If the Palaghat gap was indeed a barrier to gene flow of the elephant, it would have affected other animal species as well," Vidya told the media.

The study itself was unique in many ways, including the technique used. Never before has any work been done on genetics of the free-ranging Indian elephants though the captive-bred have been put under the scanner. For the first time, the studies used genetic material from the dung of the wild elephants and not the tissue or blood, which has been the common practice till date. Researchers used microsatellite dna markers to test inter-group and intra-group variations in the three populations -- the ones in Anamalai, Periyar and Nilgiris. Microsatellites are useful in studies of genetic variation and similarties of genetic structures across animal populations.