Elephants to get wider passage 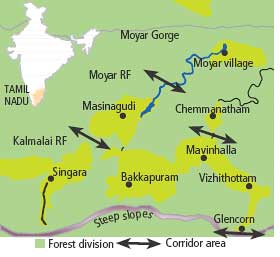 on november 6, the Madras High Court asked the Tamil Nadu forest department to submit a detailed map demarcating elephant corridors in the Niligiri mountains for conservation. The directions were given while ordering a ban on new constructions in the forest corridors used by about 1,000 elephants. Tribal communities and villagers living in the area said the high court order is being used as an excuse by the forest officials to include their villages in the elephant corridor.

We suspect the governments motive is to evict people and take control of their land, said D Nagashaila, counsel for the tribal people.

In his petition filed in 2008, G Rajendran, conservationist heading In Defence of Animals, a Chennai non-profit, had sought that an area of 500 acres be cleared of people. But the forest department is trying to include all villages in the area, said P T Varghese of Masinagudi panchayat.

In an earlier map submitted to the high court, forest officials had shown the elephant corridor extending from Moyar village in the north to south of Bokkapuram village (see map). There are 16 or 17 hamlets in this stretch where 1,000 families including 300 tribal families live, said P Chandran, a member of the Irula tribe. Chandran said the forest department was trying to include his village, Bokkapuram, in the elephant corridor just because the tribals had put in claims under the forest rights act in case they are relocated.

Field director of Mudumalai tiger reserve, Rajiv Srivastava, said the new map marking the elephant corridors was submitted to the high court in the first week of December. He refused to disclose details of the map.

R Sukumar who studies Asian elephants at the Indian Institute of Science in Bengaluru said the four elephant corridors in the area are not blocked at present. But the cultivation area of the settlements has increased and more and more people are fencing their lands. The number of resorts has also increased. So, before the corridors get closed, there is a need to notify them and work with the communities to restrict development, said Sukumar. His report notes that the main threat to the elephants is not from the villagers but from mushrooming resorts and the Pykara hydroelectric project in Singara. N Mohanraj who heads the Nilgiris office of wwf India said relocation is not necessary. Selective land acquisition will work, said Sukumar.