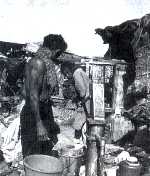 as the mercury has soared to 47c mark in Delhi, water has become precious in many parts of the capital. Scientists say that water will be one of the rarest commodities in the next few years because all sources of groundwater in Delhi are depleting at an alarming pace.

A recent study conducted by the hydrologists at the Nuclear Research Laboratory in the Indian Agricultural Research Institute, shows that the groundwater level in the Capital is going down at an average of 0.4 m every year.