End of the road for Bangalore? 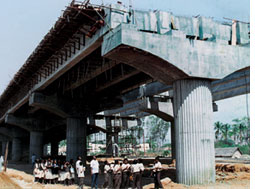 bangalore Municipal Corporation's road projects have hit a dead end due to non-availability of funds. The corporation had applied for Rs 7,536 crore for flyovers and grade-separator projects under the Jawaharlal Nehru National Urban Renewal Mission (jnnurm).

"Our city development plan had many road projects because the public expressed the need for them. We haven't received the second instalment for a lot of projects and Rs 105 crore for developing 170 km of arterial and sub-arterial roads have still not been released. We haven't even got an official response," says J Manjunath of the Bruhat Bangalore Mahanagar Palike.

Officials in the Union Ministry of Urban Development say the ministry has decided not to clear any more road and transport projects under jnnurm unless cities submitted a comprehensive mobility plan. "There is no blanket ban but we have asked cities to submit a mobility plan. We did return some projects because cities did not have it," says S K Lohia, director in the ministry. The centre formulated a National Urban Transport Policy in April 2006, which stressed that projects should be designed keeping in mind "the mobility of people rather than vehicles and should accordingly give priority to pedestrians, public transport and integrate land use and transport planning".

O P Mathur of the National Institute of Public Finance and Policy, New Delhi, says the government was focusing more on transport than roads. "Initially, they cleared a lot of projects but suddenly realized that a lot of money is going into flyovers. But this was not abrupt. They have given money for improving roads where cities have given convincing data for the need," he said. "We need to remember that the focus of jnnurm is reforms and not just infrastructure. If Bangalore corporation has not been issued finds, it may be because they have not been able to carry out certain reforms," he added.

The move has been criticized because of the centre's delayed response. "The government should have made it clear that no flyovers and road projects will be sanctioned unless cities kept in mind decongestion, peddlers and bullock carts. They cleared projects because they were in a hurry to allot funds," says Vinay Baindur of Collaborative for Advancement of Studies in Urbanism through Mix-Media.