More than amphibians, it is the reptiles that are in danger of becoming extinct, claims a new study 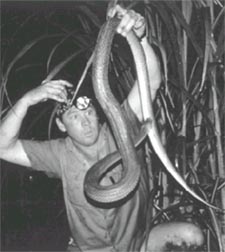 the international focus on vanishing and deformed amphibians like frogs, toads and salamanders has masked the problems of another group of wildlife: reptiles. A new report says that reptiles -- including turtles, lizards, alligators and snakes -- are in even greater distress worldwide than their better known cousins. These two classes of animals are closely related, but the focus of general concern has been almost exclusively on amphibians. Now, however, scientists are hoping that the general public will recognise what they have long known -- that reptiles across the globe are affected by many of the same forces as amphibians but with even greater impact. The report has been published in the journal BioScience .

Says Whit Gibbons, a herpetologist and professor of ecology at the University of Georgia, who conducted the study: "Although the amphibian decline problem is a serious threat, reptiles appear to be in even greater danger of extinction worldwide." He said that while studies on both amphibians and reptiles have not been as rigorous as scientists would like, the existing documentation points to approaching crisis situation.

Habitat loss and degradation may be the largest single factor responsible for reptile loss. Even when part of a habitat is protected, such as a wetland, the surrounding terrestrial habitat needed by semiaquatic reptiles is very often not protected. Conservation biologists know that an intact habitat is necessary for a species' survival and well being. But habitat destruction is just the beginning of the problem. Invasive species introduced to new areas can spell real danger for reptiles.

One example is the Galapagos tortoise, now nearly extinct due largely to rats which destroy the tortoise eggs. Other problems include environmental pollution, disease and even the simple presence of humans among a fragile population.

Alligators living in chemically polluted areas have shown reproductive deformities. Many populations thought to be in decline have not been monitored over long periods of time, making evaluation of the problem difficult. The secretive nature of many reptiles and their large home ranges may allow a population to decline without notice.

Gibbons believes the best course for conservation initiatives is to "assume the worst" for all reptiles and amphibians while gathering more data. "The disappearance of reptiles from the natural world is genuine and should be a matter of concern," according to Gibbons. "Current evidence suggests that these declines constitute a worldwide crisis."