India agrees to ban the hazardous pesticide globally, asks for exemptions at home 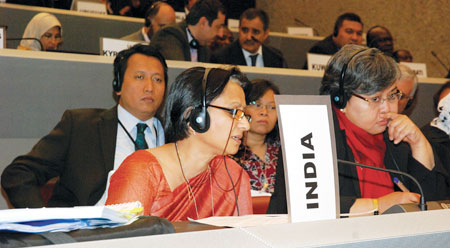 IN A tactical shift in position, India agreed to a global consensus to ban endosulfan at the recent Stockholm Convention, but asked for exemptions to continue using the pesticide at home for at least five years. So far India had been resisting the ban on the grounds that scientific evidence was insufficient to prove that the pesticide was hazardous. It is the largest producer and consumer of endosulfan in the world.

The decision was taken on April 29 at the fifth Conference of Parties (COP-5) of the UN-backed convention on Persistent Organic Pollutants (POP) in Geneva. Even at this convention, observers say, India tried to circulate a draft statement on behalf of Asia Pacific countries suggesting the pesticide has no health hazards. Bahrain, Qatar and Jordan opposed it. China, also a major producer, supported a conditional ban. Later India began stressing on a consensus decision, fearing it risked being isolated if the matter was put to vote.

So far, 81 countries have banned or phasing out the pesticide, known to be an endocrine disruptor and neurotoxin; 12 others do not allow its use. In India, it is banned only in Kerala and Karnataka following health impacts in Kasaragod and Dakshin Kannada districts where endosulfan was aerially sprayed on cashew plantations for over 20 years. Activists and political leaders have welcomed India’s decision at the convention.

But the conditional exemption to use the pesticide for 16 crops has not gone down well with many (see ‘Exempted crops’). These are the crops for which the Central Insecticides Board allows the use of endosulfan. Exemptions allowed to India, China and Uganda are worrisome, says G V Ramanjaneyulu of the Centre for Sustainable Agriculture, a non-profit in Hyderabad. Such exemption is ineffective in India as once a pesticide is allowed for use it is used on several other crops, despite not being approved for, he adds. Kerala is an example of how conditional ban of endosulfan might impair efforts for a global elimination.

Though banned in Kerala, endosulfan is being smuggled into the state through porous borders. Unlike other countries that will have to comply with the ban within a year, the exemption allows India to phase out endosulfan over five years. It can extend the exemption period by five years if alternative to the pesticides are not found. Besides, under Annex A listing, the ban takes a year to become effective, which means, on paper, India can extend the phasing out process for 11 years. “This is like a post-dated cheque,” says Gopal Krishna of Toxic Watch Alliance, an advocacy group in Delhi.

Both human and environmental health will continue to be affected as long as the phase out takes place. Besides, there is no clarity as to who would suggest the alternatives to endosulfan and whether India is even looking for an organic, safer alternative, says B Ekbal of Jan Swasthya Abhiyan, a civil society group. If a banned pesticide has to be replaced with another pesticide it is of no use, he adds.

The phase-out process will begin only after the Cabinet Committee on Economic Affairs (CCEA) ratifies the decision. Though environment minister Jairam Ramesh guided India through the tactical shift at the convention and could speed up phase-out, he is not a part of the CCEA. The fear is Sharad Pawar, the Union agriculture minister, who is a supporter of the pesticide lobby and part of CCEA, could delay both the ratification and phasing out process.

“India’s record in honouring the Stockholm Convention has been poor. The National Implementation Plan (NIP demonstrates how obligations under the convention will be implemented) that should have been submitted to the UN body in 2008 is still in the drafting stage,” says Krishna. Endosulfan will be part of it only after NIP is finalised.

Some are optimistic. R Sridhar of Thanal, a non-profit in Kerala, says India is under pressure to phase out endosulfan in five years as extension is not automatic. It will have to go back to the COP plenary of the convention and explain why it failed to find alternatives. India has successful examples of alternative farming in Andhra Pradesh and Kerala. Countries that have banned endosulfan are using alternatives so there is no dearth of information, Sridhar explains.

Mounting pressure from within the country, both from civil society groups and political leaders, could speed up banning. In the last week of April, while the COP-5 was on, the agriculture ministry wrote to states seeking their views on endosulfan. The Madhya Pradesh government was the first to respond registering its support to Kerala’s ban on the pesticide. Kerala chief minister V S Achuthanandan went on a day-long fast seeking a nation-wide ban on endosulfan and wrote to chief ministers asking for support. The leader of the opposition in Lok Sabha, Sushma Swaraj, has supported a ban on endosulfan.Supreme Court order banning endosulfan
Centre to study endosulfan effect
State of endosulfan
Relief for endosulfan victims
Pesticides lobby’s coup
New endosulfan ploy
Demand for endosulfan tribunal