Good news for the ever manipulative pesticide industry: the Dubey committee -- a panel of experts set up by the Registration Committee of the Central Insecticides Board -- has concluded that endosulfan is not responsible for the health problems prevalent in Kasaragod district of Kerala. Inexplicably, endosulfan gets a clean chit despite a National Institute of Occupational Health study proving that it is the "causative factor" in the incidence of all crippling illnesses in the area 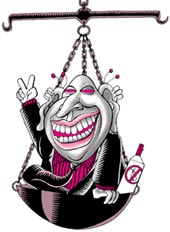 here's good news for the ever manipulative pesticide industry: the Dubey committee -- a panel of experts set up by the Registration Committee (rc) of the Central Insecticides Board -- has concluded that endosulfan is not responsible for the health problems prevalent in Kasaragod district of Kerala. Inexplicably, endosulfan gets a clean chit despite a National Institute of Occupational Health (nioh) study proving that it is the "causative factor" in the incidence of all crippling illnesses in the area. The decision bears bad tidings for local people because the statewide ban on the organochlorine pesticide may now be lifted.

In February 2001, Down To Earth (dte) brought to light the plight of the people of Padre village in Kasaragod. A link was established between the spraying of endosulfan and the diseases (see: "Omnipresent Poison", February 28, 2001). dte followed this up in July 2002 with an expos on the pesticide lobby's influence over policymakers (see: "Endosulfan Conspiracy", July 15, 2002). The ensuing public outcry saw the Kerala High Court prohibiting the use of the pesticide in August 2002. The court, however, left it to the rc's expert panel to take a final decision.
The eight-member expert panel, headed by O P Dubey, was formed in April 2002. Dubey is the assistant director general (plant protection) of the Indian Council of Agricultural Research, New Delhi. The committee is an inherently flawed entity.

While there was adequate representation from the pesticide industry at the rc meeting, no civil society organisations or victims were heard. This asymmetry is evident in the composition of the committee, which includes two industry members but leaves out local bodies such as the Padre village panchayat . The rc "does not recognise civil society organisations", explains its chairperson, C R Hazra. So far as the victims themselves are concerned, "we cannot have farmers on an expert committee", he adds.

"The panel, with its pro-industry tilt, was lopsided from the outset," asserts Shree Padre, a freelance journalist from Padre who has been espousing the victims' cause. Jayakumar C, coordinator of non-governmental organisation (ngo) Thanal, also vents his scepticism: "We never had any expectations from it." The Thiruvananthapuram-based ngo has spearheaded the campaign against the pesticide.

Questions are being raised about the role of the expert panel's head, too. "Dubey has been defending the use of endosulfan for a long time. What else can a committee led by such a biased person conclude?" asks Jayakumar C. "He has played into the hands of the industry," alleges Sridhar R, also of Thanal. On his part, Dubey admits that he has always been in favour of the pesticide since it is still used in 75 countries. At the same time, he denies that he has kowtowed to pesticide manufacturers. "There was no pressure on us," he tells dte.

Notwithstanding his justification, the fact remains that endosulfan is banned in about 10 countries and its use severely restricted in more than 10 nations. Furthermore, the us Environmental Protection Agency categorises it as highly hazardous.
In the first week of March this year, Dubey inconspicuously submitted the panel's recommendations to Hazra. It is noteworthy that not all the members have endorsed the findings. Hazra is of the view that dissent is common in such a body. In any case the chairperson's nod is enough, he contends.

Though the report has not been made public as yet, senior officials who have access to the document, as well as those who were part of the process, informed dte about the final recommendations. "The committee has inferred that there is no concrete evidence of endosulfan having caused the diseases in Kasaragod, and its use should be continued," reveals a panel member on condition of anonymity. Dubey's stance is also a giveaway. "If the right dosage is applied, it is a very good chemical," he maintains.

The panel's report does not come as much of a surprise because of its members' preconceived notions. "Even before they had begun the so-called fact-finding exercise, Dubey told the press in August 2002 that endosulfan was unlikely to be the culprit," points out Shree Padre, adding: "In Kerala, he merely carried out routine inspections of the region. On the basis of these tours, he made the preposterous suggestion that areca nut chewing was behind the health problems of local people." The scribe charges that Dubey's "one-point mission" was to "exonerate" endosulfan. "This is not science, it is vested interest," he observes.

The inhabitants of Padre and eyewitnesses corroborate this version. They reveal that during the committee's Kerala trips -- the last of which took place in January 2003 -- Dubey and his team appeared more worried about which insecticide could be a suitable alternative, rather than delving into the after-effects of endosulfan. This tangential subject actually seems to have caught the fancy of several agricultural scientists (see box: In hard-sell mode).


The most shocking aspect of the entire controversy is the committee's blatant disregard for scientific data, which confirms that an entire village was poisoned by endosulfan. For instance, it has chosen to ignore the final report of the Ahmedabad-based nioh -- presented to the National Human Rights Commission in July 2002. This as yet unpublished study is in the possession of dte. "There is significantly higher prevalence of neurological disorders (and) congenital malformations in female subjects, and abnormalities related to (the) male reproductive system in the study group (Padre village).... The most probable cause (of) the health problems ... could be relatively high and contaminated exposures to endosulfan through various environmental media such as food, water, soil and air.... This supports the hypothesis of endosulfan as a causative factor," notes the document. nioh had tested water, soil and serum samples. After a gap of almost a year and a half since spraying last took place, pesticide traces were still found in the affected area (see table: Persistent poison).


The dichotomy between the findings of the expert panel and those of nioh may spark an inter-ministerial row. The Dubey committee has been constituted by the rc, which comes under the Union ministry of agriculture. On the other hand, nioh is an affiliate of the Indian Council of Medical Research and, therefore, a part of the Union ministry of health and family welfare. Are the diametrically opposite stands indicative of just lack of coordination? Or is it a comment on the reach of the Rs 4100-crore pesticide industry?

The recommendations of the Dubey committee have not yet been accepted. "We will hold a meeting of the rc and take a decision soon," says Hazra. If the rc gives a green light, the matter will be put up before an inter-ministerial committee of secretaries after which it would be finally adopted by the Union government. Will profits prevail over sound science? At least Padre's fate hinges on the outcome.
Pesticide Industry Pesticide Industry Pesticide Industry Endosulfan Kasargod Kerala Health Effects Health Effects Health Effects India Occupational Health Legislation High Court NGO News News News Web edition Web edition World Economic Forum Thermal energy Renewable Energy Renewable Energy Piyush Goyal Down to earth Davos
Donate Now