Endosulfan may finally have a destroyer 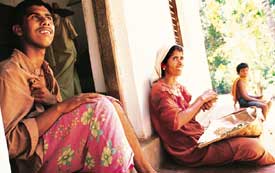 endosulfan, the deadly pesticide, now has a destroyer. Scientists at iit Madras have found a bacterial mixture that can break it down to environment friendly inorganic chemicals.

Ligy Philip and Mathava Kumar studied the action of a bacterial culture consisting of Staphylococcus Sp, Bacillus circulans-i and ii on endosulfan-contaminated soil. Their paper, posted on-line on the website of the Journal of Hazardous Materials on May 30, 2006, states that the bacterial mixture converts endosulfan into mineral form in both aerobic and anaerobic conditions. The paper also said that addition of external carbon increased degradation efficiency. "This enriched bacterial consortium can detoxify endosulfan and completely degrade it in the presence and absence of other food.They first remove the chlorine atoms, slowly degrade it and convert into co2 and other environment friendly inorganics," says Philip. "These bugs can be applied in contaminated soils. By providing proper nutrients, moisture content and other conditions conducive for their growth, within weeks the pesticides can be degraded." he adds.
With a half-life, which can range up to 800 days, endosulfan is toxic in nature. It is also an endocrine disruptor and causes severe disturbance in the female reproductive cycle, resulting in birth defects. According to the Atlanta-based Agency for Toxic Substances and Disease Registry (atsdr), endosulfan affects the central nervous system. Hyperactivity, nausea, dizziness, headache or convulsions have also been observed. High doses may even be fatal. It also damages testes of animals.

Endosulfan enters the air, water and soil during its manufacture and use. When sprayed on crops, it breaks down partially in a few weeks but sticks to soil particles. It may take years for it to break down completely. Human beings are usually exposed by eating food contaminated with it, working in industries involved in making endosulfan or as pesticide applicators. It can be easily absorbed by stomach, lungs and skin. In 2001, in Kerala, endosulfan spraying became suspect when linked to a series of abnormalities noted in local children. It was banned and the ban was revoked (see 'There is no justice', Down To Earth, April 15, 2004).

While who classifies endosulfan as moderately hazardous, the us Environmental Protection Agency (usepa) classifies it as a highly hazardous pesticide. According to atsdr, usepa recommends that the amount of endosulfan in rivers, lakes and streams should not exceed 74 parts per billion (ppb). It does not allow more than 0.1 to 2 ppb on raw agricultural products. And the us Food and Drug Administration (fda) allows no more than 24 parts per million on dried tea.
Biodegradation of endosulfan has got significant attention compared to other physico-chemical methods for its complete detoxification.

In agricultural fields, endosulfan is bound to soil residues up to a depth of about 300 mm to 500 mm. Within agricultural fields, variations in soil properties with depth are much greater than acoss the surface. Moreover, in any in-situ bioremediation, area is not the crucial determinant, possible changes in biotic and abiotic factors are.

According to Philip, though, many researchers have successfully enriched some varieties of bacterial and fungal isolates for endosulfan degradation, the reasons for contrasting patterns of degradation rates in water and soil are still unclear.

"Biodegradation by bacterial cultures has been reported earlier. But those cultures have not been able to mineralise the pesticide completely.Certain metabolites, often more toxic than the parent compound, were accumulated in the process. But our method can completely mineralise endosulfan," says Philip.

On bacteria, Philip says, "The bacteria are isolated from pesticide-contaminated soils.They are soil bacteria.We have not genetically modified them. Hence, they will remain in the soil, their natural habitat."