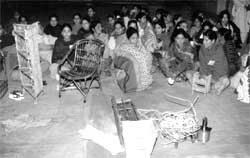 LANTANA CAMARA, a terror for cultivators, will finally see some use. Not only a menace in areas where the soil is fertile, the weed is equally at home in poor soils. Its seeds are disseminated widely by birds and have a high rate of germination. Moreover, Lantana is highly adaptable - it thrives in wet as well as dry regions. The plant had colonised and swamped vast areas, including common lands, forest areas, wetlands and private fields. But now, the weed can be used to make furniture.

Anil P Joshi of the Himalayan Environmental Studies and Conservation Organisation ( hesco ), Himachal Pradesh (hp), believes that weeds must be seen as biological resources. hesco is thus propagating the use of Lantana for making furniture. The organisation is providing training to villagers at Gwar Chowki in Chamoli district of hp in making chairs, racks, sofas, tables and other furniture from the weed. Follow-ing the efforts of hesco, the Environ-ment Energy Group in Una and the Natural Environment and Education Development Society at Kotdwara have started providing training in furniture making from Lantana to youth and women.

Joshi's viewpoint involves debunking the conventional definition of weeds. Instead of merely concluding that Lantana is a menace, he opts for its productive utilisation. The furniture made from this plant is similar in looks to that made from cane, which was also classified as a weed about 200 years ago. " Lantana is strong and water-resistant, as well as termite-resistant. Above all, it is cheap," says Joshi. Furniture made from it represents the use of decentralised technology to commercially utilise an untapped local resource with a readily available market.

Besides furniture, hesco is advocating other uses of Lantana as well. The plant's aromaticity has led to the production of incense sticks from the leaves. And, the burning of its leaves acts as a mosquito repellent.

Villagers have been utilising Lantana as fuel in areas where forests are degraded. However, a huge amount of biomass is required as it burns rapidly. hesco is propagating the use of fuel briquettes made from Lantana to overcome this problem. In addition, the hesco is working on ways the weed can be used to fuel gasifiers which provide electricity to remote villages.

Joshi had presumed that Lantana could not be eradicated by mechanical, biological or chemical means, but only through its utilisation. He points out another advantage of using the weed: it will give a much-needed boost to the local economy and check migration of youth to the plains.