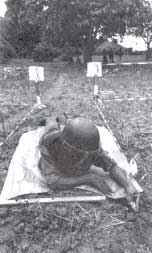 IT is an example of how innocent civilians pay the price for strategies of politicians and war-mongers. Unexploded landmines - more than 100 million of them - left behind by wars and civil strives claim thousands of lives and injure hundreds every year. In the recent years, these have emerged as a serious menace in various war-torn parts of the world such as Angola and Cambodia. Vietnam, for instance, has suffered severely from the mines that laid by the US army during the invasion of this small Asian nation in the 1960s. Though international organisations are trying their best to curb the use of landmines, very little can be done about those that are still lying around, as if waiting for an unsuspecting person to step in them.

But science has now stepped in. According to latest reports, a mine detector that senses the explosive inside the weapon has been developed by us researchers. Most existing mine detectors look for metal casings or objects of a particular shape - and plastic mines are the hardest to detect.

The new detector is based on nuclear quadropole resonance (NQR), a technique that is already used in airports to detect explosives concealed in baggage. A suspect piece of luggage is placed in the middle of a coil that generates and receives radio pulses. The atomic nuclei absorb particular radio frequencies and in between the pulses the receiver looks for the absorption pattern. So the baggage containing Semtex, for example, would show a characteristic pattern. Using NQR to find mines buried in the ground is far more difficult than detecting explosives in baggage. The detector, which would be mounted on the front of a vehicle, may not be directly over a mine. And an antipersonnel mine buried under a few centimetres of soil will receive a stronger pulse than a more deeply-buried antitank mine, for instance.

These complications have previously hampered the use of NQR in clearing mines. The strength of any return signal depends on the timing, duration and frequency of the search pulses. And the operators have to tune the pulses and adjust their timing manually to produce the clearest signal and pick it up reliably.

Now, Jeffrey Schiano of Pennsylvania State University, and Mark Ginsberg of the us army's Constructional Engineering Research Laboratories in Illinois, USA, have developed a system that automatically tunes the search pulse parameters to obtain the clearest signal possible, adjusting for variations in the intensity of search pulse that suspected landmines receive. "The system examines the return signal and then changes the search pulse width and timing in the direction of the best possible signal," says Schiano.

The feedback system "wiggles the pulse back and forth, looking for the best signal," Schiano explains. As the algorithms home in on the signal, they use progressively smaller steps to change the pulses. "It takes longer to search, but you get better confidence in the results," reports Schiano.

Alois Sieber, head of a project developing mine clearance techniques at the European Commission's Joint Research Centre in Ispra, Italy, welcomes the improvement of NQR as a "very promising technology for detecting the explosive itself.

Because NQR is best at detecting mines with a small metal content, it could be most effective if combined with metal detectors and other sensors that collect information on shape, according to Sieber.