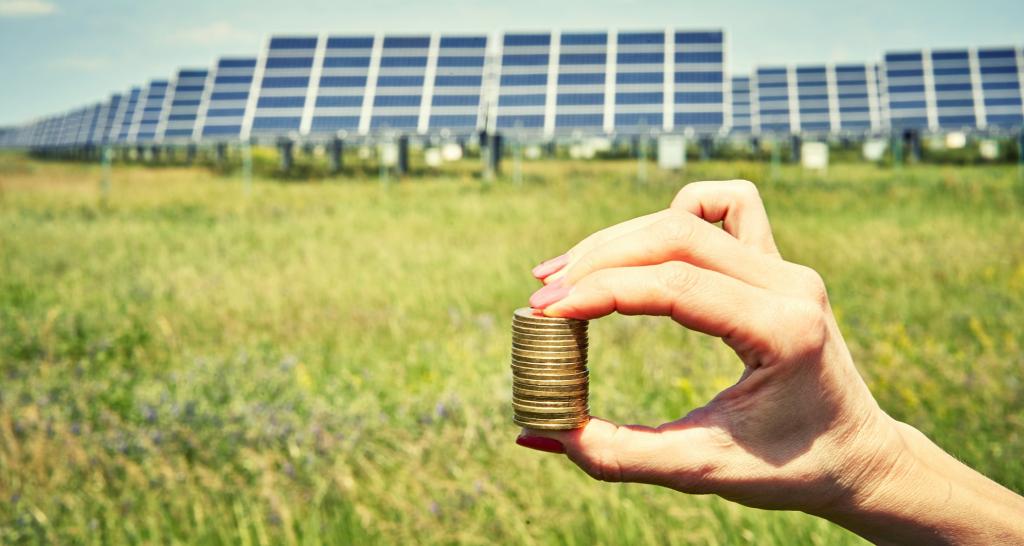 Power generators in India are standing on a wobbly pitch. Distribution companies (discoms), their largest and often only consumers, suffer from chronic inefficiencies and financial distress which translates to frequent delays in payment owed for the supplied power. This often stretches to over several months threatening financial position of generators.

Data from the Union Ministry of Power’s (MoP) Payment Ratification and Analysis in Power (PRAAPTI) portal shows that outstanding dues from 65 discoms amounted to a massive Rs 81,000 crore owed to 67 generation companies as of August 2019.

As a result, they have delayed paying the generators with outstanding dues, registering a massive jump of 33 per cent since March 2019 (see 'Outstanding payments from discoms to generation companies'). 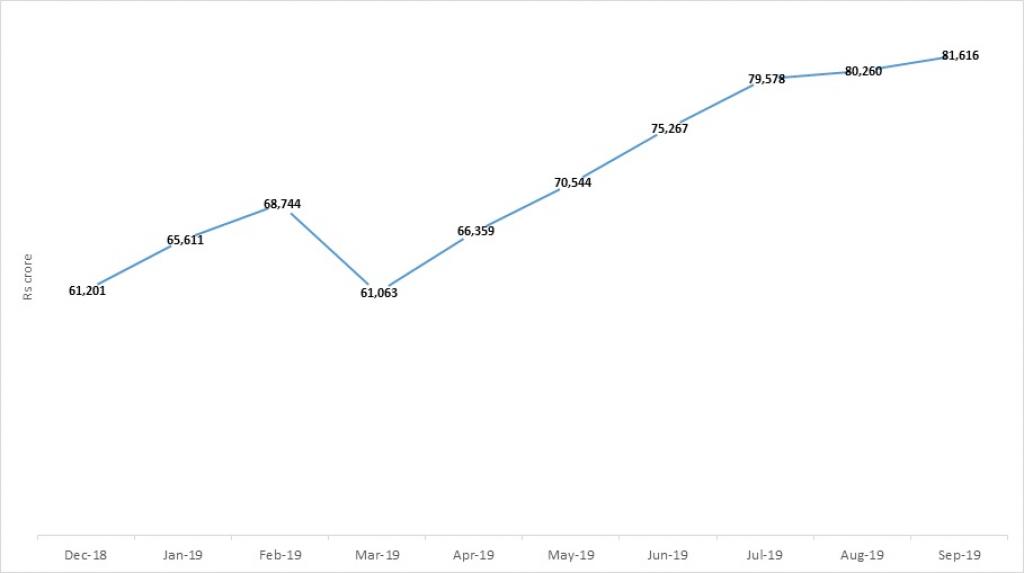 Dues have increased by over 33 per cent since March 2019

The challenge of payment delays and mounting dues is equally massive for Renewable Energy (RE) generators, with far reaching implications, posting one of the biggest threats to achievement of the 175 GW renewable energy by 2022 target.

The Indian Renewable Energy Development Agency Ltd (IREDA), the government-owned RE financing institution, had estimated in April 2018 that 20 per cent of the overall discom dues or about Rs 13,820 crore was owed to RE companies. Following this, the Central Electricity Authority (CEA) started dedicated monitoring of dues to RE companies.

According to CEA, the outstanding payment dues towards 513 RE projects amounted to Rs 9,735 crore by the end of July 2019, affecting 26.7 GW RE capacity.

“Developers are struggling with cash flows due to which most have stopped bidding for new projects. Available cash is being preserved to service bank loans for existing projects. There is a looming threat that if the situation persists, projects may be declared non-performing assets. Unfortunately, there is no certainty of when this problem will end,” Manoj Upadhyay, founder and managing director, Acme Solar, said.

While payment delay is a segment-wide phenomenon, the plight of RE generators is worse as discoms tend to prioritise payments to coal-based power plants fearing discontinuance of supply.

“The thinking is that coal-based power plants need money to buy coal and cannot afford to run beyond a point, while wind and solar plants will continue generating even if payments are not made,” a sector expert said, requesting anonymity.

The risk of payment delay varies widely across RE-rich states. Andhra Pradesh and Tamil Nadu each account for 25 per cent of the total outstanding dues, while Telangana and Karnataka collectively account for another 25 per cent (see 'State-wise payment owed to renewable energy sector').

The payment situation in Andhra Pradesh is linked to the state government’s desire to renegotiate old “expensive” power purchase agreements. Nearly half the capacity installed in the state is affected with outstanding dues, with an average estimated delay of over 12 months.

In case of Tamil Nadu, the affected capacity is twice that of Andhra Pradesh, but the average duration of delays is lower at about six months. Telangana reports the third highest dues despite only 1.8 GW being affected due to payments pending since over a year.

Meanwhile, Karnataka has as much capacity as Andhra affected by delays but over an estimated 4-5 months.

Gujarat is the only state standing as an exception, where the aggregate dues are less than Rs 20 crore and over only a month or two.

“There are fair amounts of payment defaults but these are very specific to certain states. There are three states with huge payment backlog — Tamil Nadu, Andhra Pradesh and Telangana. At the same time, there are states like Gujarat that have always been good in clearing payment,” Arul Shanmugasundram, chief operating officer, Tata Power Solar Systems Ltd, said. 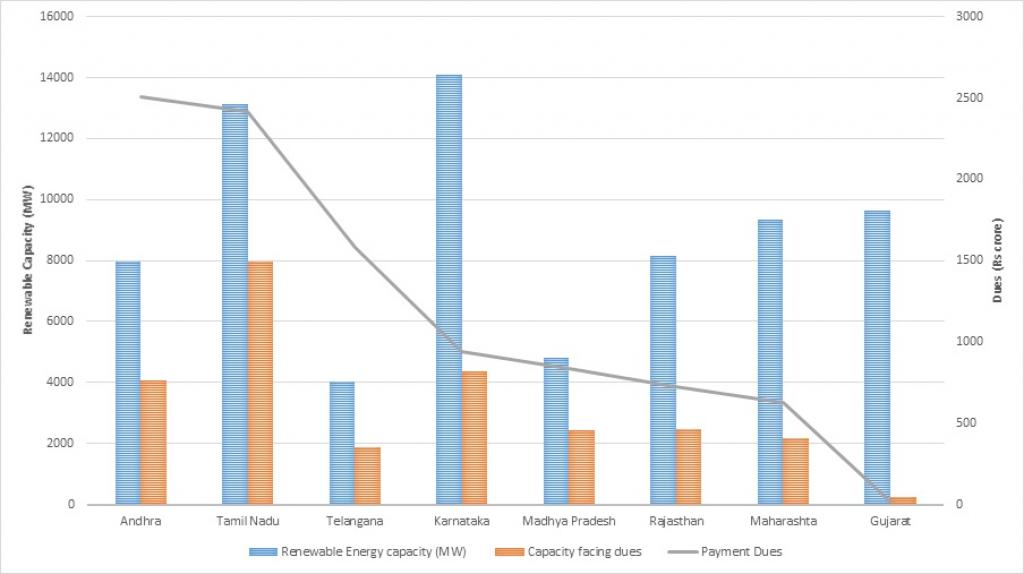 ReNew Power, Adani Group and Tata Power Renewable Energy, three of India’s leading RE developers, are owed nearly Rs 3,860 crore for 6.4 GW of operational RE capacity. SECI, the Central government-owned intermediary off-taker, also has a large capacity of 1.8 GW affected with over Rs 600 crore due.

RE developers with accumulated dues of over Rs 300 crore (Source: CSE Analysis)

Three largest developers account for a quarter of the total dues

There are 17 wind and solar projects that have accumulated outstanding dues exceeding Rs 100 crore each (see 'Projects with accumulated dues of over 100 crore'). Most of these are located in Tamil Nadu and Andhra Pradesh.

Projects with accumulated dues of over 100 crore (Source: CEA)

Investments in the RE sector had flourished over the past decade after the government provided credible assurance about payments. SECI was set up in 2011 with the objective of aggregating demand and reducing off-taker risk associated with discoms. Since then, multiple mechanisms have been introduced to provide payment security in RE power purchase agreements (PPAs).

However, according to industry players, the LC mechanism is expected to bring limited relief. Indeed, the MoP guidelines for PPAs already included provision requring LCs to cover payment risk but the state govt/discoms frequently insisted that they didn’t wish to provide LC support.

Even for a few projects where LCs were opened, banks/discoms often asked developers not to present the LC as they didn’t want to put the discom under pressure. Furthermore, state governments and discoms are asking the MoP to drop this requirement since the discoms are financially weak and may not be able to obtain additional LCs from banks.

The MNRE is trying to introduce stricter mechanisms to ensure payment security for upcoming projects. Under the latest amendment to the competitive bidding guidelines for solar projects introduced in October 2019, a payment security fund is proposed to be set up with Rs 5 lakh per MW contribution from generators. It also allows for introduction of additional risk premium of Rs 0.10 per kWh for adding to the payment security fund.

However, insurance through such mechanisms can only provide comfort to investors against a risk of delayed payments over a limited time period. In a scenario where delays linger over long durations or where non-payments becomes a credible threat, made probable by the chronic inefficiencies of discoms, such funds will not help change the investor sentiment.

Meanwhile, in absence of improvement in the payment scenario for existing projects, developers remain underwhelmed by the changes.

“The challenge right now is of restoring investment appetite of the industry. The new guidelines will solve the problem in the future. But we must find solutions for the 30-32 GW capacity on-ground and suffering. Investors cannot be approached to fund new projects when money for existing ones is held up,” Upadhyay said.

Sunil Jain, chief executive officer and executive director, Hero Future Energies, agreed. “If I am not getting paid for an old project, how do I get the guarantee that I will get paid for power generated by new ones?” he said.

Piling up of payment dues are thus among the key roadblocks in India achieving the 175 GW RE target by 2022. The increased quantum and perception of risk due to payment delays has made banks wary of lending for new projects. India Ratings and Research Private Ltd has already downgraded the rating outlook for the solar sector from positive to stable.

Developers are holding on to available capital to support loan payment of existing projects, unsure of when the situation is resolved. Tenders are thus being serially under-subscribed.

“Streamlining payment process for the existing projects is extremely crucial. Otherwise, there would not be enough capital to invest in new projects,”  Jain pointed out.

The developers participating in recent tenders are usually the ones with deep pockets. The government may have concrete plans for timely launch tenders, but actual auctions will remain doubtful until the payment delay challenge persists.

While risk mitigation through stricter enforcement of provisions such as LCs or through creation of payment security funds may help, these need to be backed by serious penalties for violation. Also, the government must address its root cause — discom inefficiency — through bold structural reforms targeted at improving financial viability of the distribution segment.

This is critical not only for the immediate 175 GW goal, but also for the longer-term vision of 450 GW of RE.