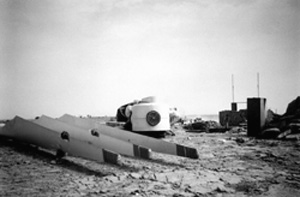 vast windswept desert lands of Rajasthan make an ideal location for setting up wind power generation projects. The state government woke up to the fact in 1999 and came out with its new policy for the wind energy sector, opening the sector to private participation. The move is beginning to pay dividend. Private investors are moving in and Indore-based Kalani Industries Limited leads the pack. Rajasthan Energy Development Agency's ( reda' s ) demonstration projects, set-up in Jaisalmer, Chittorgarh, and Phalodi, have shown the way.
Barabagh, literally 'the large garden', in Jaisalmer, was once famous for providing vegetables to the city. But reda's demonstration project has changed things. The Barabagh area has gained itself a name for the wind energy projects coming up in the area. Kalani too has put up its windfarm at Barabagh. "Kalani Industries' three mw wind farm is the first independent power project in Rajasthan," says Sudhansh Pant, chief executive officer and director of reda .

Though the policy on wind energy was announced in 1999 (see box: Wind energy policy of Rajasthan ), the sector was actually opened in March 2000. Since then, several parties, such as the Rajasthan State Mines and Minerals Limited, Ahmedabad-based Suzlon Ltd and Munoth Neg, a tie up between Chennai-based Munoth Financial Services Ltd and Denmark-based neg Micon, have shown interest. Before opening the wind power sector to private parties in March 2000, the state government set up three demonstration projects to show the entrepreneurs that wind energy-based power projects could be successfully run in the state. Dinesh Changhani, project officer of reda in Jaisalmer, says: "Once the private companies are assured of profits they will participate.

The three demonstration projects at Jaisalmer, Chittorgarh, and Phalodi (in district Jodhpur), proved the profitability of the venture. Out of the three projects, the Jaisalmer-based demonstration showed the best results. The Barabagh region enjoys a higher wind velocity than the other two regions.

reda 's Jaisalmer-based two-mw wind farm was set up by Bharat Heavy Electricals Limited (bhel ) in Oct 1999. bhel provided the technical know-how as well as the machinery for the wind farm. It signed a five-year operation and maintenance contract with reda . The reda turbines use geared technology . The windmill operates on one gear when wind speeds generate enough torque to rotate the blades at at 750-1,000 revolutions per minute (rpm), and uses the other gear when the blades can rotate at a rate greater than 1,000 rpm. The blades are unable to rotate at a velocity below 3.5 metre per second. The maximum possible output of reda wind farm is four lakh units per year per windmill.
Egged on by reda 's good results, Kalani went about establishing its first project. It contracted Enercon (India) Ltd, the Germany-based subsidiary of Enercon g mb h, to provide the technology and to operate and maintain it for 10 years. T R Melroy, manager for business development and operations, Enercon (India) Ltd, narrates, "We studied the wind velocity and other factors for about one year before beginning project work." Enercon estimated that, with its advanced technology, it could do better than the four-lakh units per year per windmill produced by reda . The land for the project was subsidised by the state government. Kalani Industries had to pay a one time charge of 10 per cent of the total cost of land as down payment and a minimal annual rent for the 30-year lease period.

Kalani plans to set up a 25 mw wind farm. But some problems have cropped up in procurring the license. In the first phase it has set up a three mw windfarm which has began generating electricity. It has set up six of the 12 windmills needed for the three mw farm. The total project cost of the wind farm is projected at Rs 17 crore. Kalani has taken Rs 12 crore loan from the Indian Renewable Energy Development Agency ( ireda ).

The Enercon technology used by Kalani is gearless and more efficient in converting wind energy into transmissible power. It works at lower wind velocities than the bhel technology does. The windmills also use revolving blades to match the wind direction. When completed, the Kalani Industries' wind farm is expected to generate 5.6 lakh units of power per year per windmill.

The electricity generated from the Kalani wind farm is sold to the Rajasthan State Transmission Corporation ( rstc ) at a rate of Rs 3.17 per unit. The rate will increase by five per cent per annum. The present cost that rstc has to pay to Kalani is less than the cost for purchasing power generated from conventional sources, which varies between Rs 4 and Rs 5 per unit in the state. Kalani Industries is allowed to sell its power directly to the consumer, but setting up one's own grid is a costly affair. rstc charges Kalani Industries two per cent wheeling charges, or the charges paid for drawing power from the grid to run the windfarm.

The Kalani windfarm is important. Many other potential investors wait for it to take off before they put their money into wind energy projects in Rajasthan. Other private entrepreneurs wait for results to trickle in before they commit. "Right now, companies are scared to invest huge amounts of money. But, once we hit it right and show it makes business sense to invest in renewables, they will come forward," says Melroy.


But there are a few things that reda should take care of. The prospective entrepreneurs face some problems. Manish Kalani of Kalani Industries Ltd, says, "We are not being granted the license to run the 25-mw windfarm we had applied for. The state policy says 25 mw is the maximum an individual can apply for." Sudhansh Pant says that Kalani will get clearance for just 7 mw as a host of private entrepreneurs have applied and they all have to be accommodated. The interested parties also have a wish list. "We should be provided land free of cost," pleads Melroy. Maharashtra and Karnataka, does so, he adds.

Melroy also suggests better financial help. Whereas solar projects can avail of soft loans from ireda , money isn't easily available for wind projects. The Rajasthan government had decided to set up a separate 'wind energy development fund' through which it decided to provide one third of the project cost as a soft loan to the entrepreneurs at an interest rate of five per cent per annum. But the plan remains just a scheme on papers. Kalani Industries had to take a loan from ireda . If the wind fund comes into being, it will attract lot of private entrepreneurs," says Melroy. Sudhansh Pant of reda agrees.

Another grouse is of the administrative delays in getting clearance for the project. Jaisalmer is home to an Indian air force base. Barabagh area, where wind farms are coming up, falls close to the base. High windmills obstruct the work at the air force base. "Clearances from the ministry of defense are required. We weren't told of these obstacles earlier," says Melroy. Although the local air force base officials permitted work at the wind farm, the final clearance from the defense ministry is awaited.