Biofuel is efficient but its environmental benefits are marginal 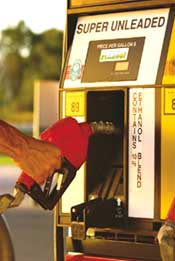 plant-based alternative fuels may be as efficient as petrol, but for now they offer only marginal environmental benefits, according to scientists who have analysed how much energy goes into producing such biofuels, and how much carbon dioxide (co2) they emit as they power vehicles.

A us study that appeared in the January 27 issue of Science (Vol 311, No 5760) claims that corn ethanol is almost on par with petrol -- on an average, it produces 95 per cent as much energy as petrol. But its much-bandied environmental advantage is not all that impressive -- it reduces greenhouse gas (ghg, such as co2) emissions only by about 13 per cent. The scientists chose ethanol, also called ethyl alcohol, for their study as it constitutes more than 90 per cent of the biofuel that is currently used the world over.

Derived from the sugars in sugarcane or corn, ethanol has emerged as a potential candidate to reduce the dependence on fast-depleting non-renewable petroleum resources. A country that has been successfully using bioethanol as motor fuel for a long time is Brazil. India also commenced its ethanol-blend petrol (5 per cent ethanol, 95 per cent petrol) programme in nine states and four union territories beginning 2003. But the ambitious programme got embroiled in issues such as erratic supply and pricing disagreements ('Dispirited agreement ', Down To Earth, September 15, 2005).

Biofuels reduce ghg emissions, as each growing plant (to produce ethanol) sucks up co2, which is accelerating global warming. But some scientists have been sceptical of biofuels. They argue that the intensive processing which is required to produce ethanol may use up more energy than it supplies.

The latest study counters this argument, saying ethanol generation may not require more energy than it provides if by-products such as corn oil and animal feed are taken into account. The team of researchers argues that the by-products not only have economic value, but displace competing products that require energy to produce. The scienists, led by Alex Farrell of the University of California in Berkeley (ucb), arrived at this conclusion by carefully examining the results of six key studies done on the costs and the benefits of bioethanol.

The six studies were evaluated through a biofuel analysis model developed by the Energy and Resources Group at ucb. In addition to net energy, the model takes into account parameters relating to ghg emissions and primary energy inputs.

The studies considered gave widely varying results. For instance, ghg emissions were found to fluctuate (for a switch from petrol to bioethanol) from a 20 per cent increase to a 32 per cent decrease. According to Farrell's team, this could be because of the use of dubious data. But on an average, the team found a decrease of 13 per cent in ghg emissions by switching to ethanol. They said the decrease could actually be more, as the figures calculated do not reflect incentives available for ghg emission control. "Given adequate policy incentives, the performance of corn ethanol in terms of ghg emissions can likely be improved," the study noted.

The scientists stress the primary reason for using bioethanol at the moment is to help reduce a country's reliance on imported oil. Another paper in the same issue of Science charts out a road map for developing a biorefinery by harnessing the advances in fields such as biotechnology, genetics, process chemistry and engineering.

The paper, authored by scientists from several research institutions from the us and the uk, pins hope on the possibility of creating a new set of energy crops that could increase biomass yields by a factor of 2 or more. Led by Arthur Ragauskas of the Georgia Institute of Technology in the us, the scientists argue that food and fibre crops had benefited from centuries of domestication efforts, but plants that could become renewable sources of feedstock for biofuels hadn't received similar attention. According to them, one worthwhile approach could be the manipulation of photosynthesis to increase the capture of light energy, which at present is less than 2 per cent.

The debate is unlikely to end here. David Pimentel, an agricultural scientist at Cornell University in the us, who together with Tad Patzek of ucb earlier showed that ethanol is not so energy efficient, argues against Farell's conclusions. He claims that the researchers have overestimated the value of by-products. Most of the carbohydrates, a useful component of feed, are used up in making ethanol. And the same carbohydrates cannot be counted as by-products, he says.