Everyone loves the cool breeze of air-conditioners (ACs). But at what temperature are we really comfortable? Is it 18°C? In that case are we cooling ourselves or refrigerating our bodies? The National Building Code puts the desirable indoor temperature during summers at 27.5°C. What if we keep the thermostat at 27°C for this summer? Use this calculator to find out how much money you are wasting by not doing so? 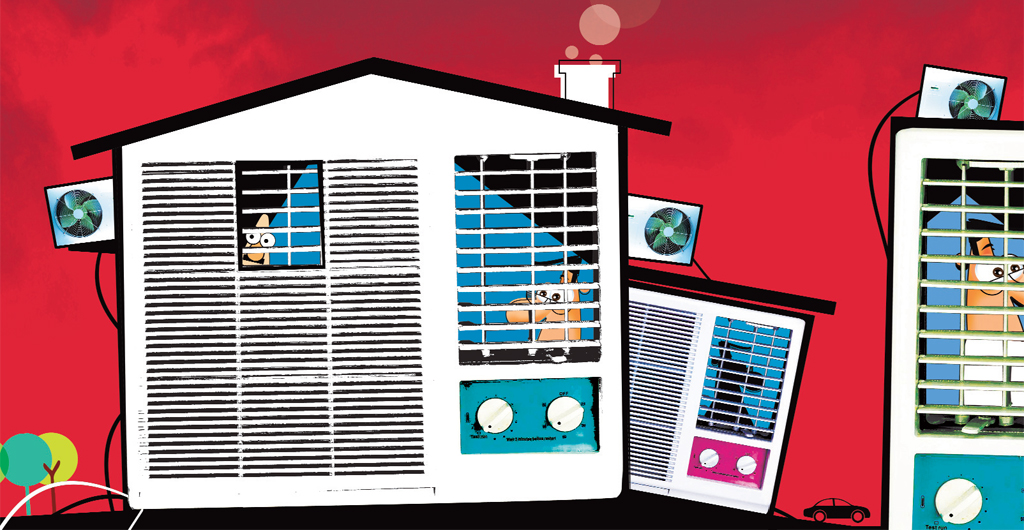 Too cool for comfort
Everyone loves the cool breeze of air-conditioners (ACs). But at what temperature are we really comfortable? Is it 18°C? In that case are we cooling ourselves or refrigerating our bodies? The National Building Code puts the desirable indoor temperature during summers at 27.5°C. What if we keep the thermostat at 27°C for this summer? Use this calculator to find out how much money you are wasting by not doing so
The calculation result is the money in Indian rupee you would have saved had you used your AC at 27 degree Celsius. National Building Code puts the optimum temperature condition at 27.5 degree Celsius. Also, ACs rated efficiency is tested at 27 degree Celsius.
ASSUMPTIONS

Air Conditioners (AC) tip sheet
A properly designed building won’t require you to be dependent upon AC for your thermal comfort. Unfortunately, most of us are not so lucky. We live in houses and apartment buildings that can’t be shifted around on site or significantly renovated. With that in mind, the most obvious place to look for improving your home’s energy efficiency is the mechanical systems that provide heating and cooling. If you really need to have one, here are some tips apart from setting your thermostat at 27°C to limit the energy needs of your air conditioner and increase its cooling power.

Waning winter is the time when people call up their dry cleaners to get heavy business suits and jackets cleaned before packing them for the next season. Soon the wardrobes are occupied by bush-shirts, kurtas and T-shirts made of cotton and linen, which are perfect to keep people cool through heat and sweat.

But air conditioning is probably changing the way we dress. Conference rooms, auditoriums, workspaces and malls are running their air conditioners at as low as 18-19°C to keep it cold for their employees and visitors. The question then is: Is cold is really comfortable?

At such low temperatures, only a person wearing a climate-inappropriate three three-piece business suit or a stretch lycra jeans would feel fine while someone who is clad in a summer-friendly bush-shirt would be quivering in the cold. Besides being too cool for comfort, there are monetary implications of keeping the ACs at such low temperatures. For every degree decrease in thermostat setting, there is increased energy consumption of fiveper cent. So there would be fatter bills to pay to keep temperatures low.

It is surprising that India with all its energy concerns never gave serious consideration to appropriate clothing as an energy conservation measure. Our neighbour, Pakistan, has proved to be the smarter one. Like in most parts of India, temperatures in some parts of Pakistan reach around 40°C in peak summers. The Pakistani PM’s office has prescribed a dress code for summers. The dress code recommends light-coloured, loose-fitting clothes to combat summer heat. Government employees will also be allowed to wear shoes without laces or sandals without socks at work. Further, the government has also gone ahead with stricter steps–like banning air-conditioners in its offices–to cope with power shortage. The Japanese have also mandated season appropriate dressing for building occupants. So three piece suits are out for them in peak summers, and peak summer for them is just around 30°C!

So isn't it time Indians start to dress down and flaunt the cool bush–shirt. Wear light to set things right. Right?

How rising incomes are lowering room temperatures at the cost of energy, health and comfort

“I can’t imagine my day without air-conditioners. I even ensure that I buy vegetables and fruits from an air-conditioned supermarket,” says 28-year-old Deepali Sinha Kapoor, a marketing executive in an IT firm in Lucknow. Kapoor is so used to cool spaces that besides spending long hours in her air-conditioned office, she spends her weekends touring air-conditioned malls.

Like Kapoor, many young people and families crowd malls and multiplexes in the summer to escape the heat and revel in crisp air-conditioned comfort. Manufacturers, cashing in on the summer frenzy for air-conditioners (ACs), dole out attractive offers. Originally, it were manufacturers of products susceptible to heat and humidity, like tobacco, chocolate and colour printing, who had commissioned experiments in mechanical cooling. Emphasis has shifted to comfort systems, with air-conditioning aimed more at cooling living space than equipment and consumer items.

Higher disposable incomes and accompanying lifestyle modifications are major drivers of the demand for ACs in India. “People want to feel comfortable both at home and at their workplaces and ACs provide them this comfort,” says Anup Bhargav, senior general manager, Godrej Appliances.

A study by Mckinsey Global Institute (MGI) states the middle class in India will swell from 50 million at present to about 583 million by 2025. That will be 41 per cent of the population. This upwardly mobile middle class is likely to use ACs, vacation annually, dine out and opt for global brands, according to MGI. Small wonder then the AC market in India is growing at over 30 per cent annually.

Studies show that living and working in buildings with strictly controlled temperature conditions raises thermal comfort expectations. People become accustomed to air-conditioning and do not want to settle for anything less. India is beginning to show signs of this discomfiting trend.

“Overindulgence in air-conditioning has made people its captive users and they hardly venture outdoors,” says S K Chhabra, head of cardio-respiratory physiology, Vallabhbhai Patel Chest Institute in Delhi. “A large number of parents that come to us for admission enquire about air-conditioned classes. Today it is a matter of competition and fully air-conditioned schools score over others,” says Richa Khandelwal, a counsellor at Euro Kids, India’s largest preschool chain.

Some architects believe that Indians need to use ACs only during the peak summer months. A well ventilated room with a fan at maximum speed can provide adequate comfort the rest of the year. The demands of modern living have substituted traditional commonsensical measures, such as wearing light clothing, eating light and taking afternoon siestas, with more energy-intensive cooling mechanisms.

“Medical science has established that being exposed to a wide temperature range allows the body to be more resilient in the face of variation. Instead, most people today prefer to have an artificially controlled environment through mechanical cooling,” says architect Gaurav Shorey. “What’s even worse is that people wear three-piece business suits or stretch jeans and then run ACs at 19°C to keep themselves cool. What is it that stops them from wearing a cotton shirt or a kurta which can keep the body cool naturally,” asks Shorey.

Building norms do not sufficiently address thermal comfort. The National Building Code of India (NBC) 2005 describes human thermal comfort as a condition of surrounding thermal environment under which a person can maintain a body heat balance at normal body temperature without perceptible sweating. It depends on factors like age, metabolic rate and clothing, which in turn are affected by air temperature, relative humidity, radiation from solid surroundings and rate of air movement.

The tropical summer index (TSI) is a tool that helps determine the combination of variables such as temperature, relative humidity and air velocity that makes a person feel comfortable. NBC states that the thermal comfort of a person lies between TSI temperature values of 25°C and 30°C with optimum condition at 27.5°C. But for air-conditioned spaces the same code proposes an indoor temperature range of 23-26°C for summers and 21-23°C for winters.

The Bureau of Energy Efficiency’s Energy Conservation Building Code (ECBC), which aims to regulate energy consumption of commercial buildings that usually have ACs, does not define temperature and humidity standards. “Ideally, codes should specify the range of temperature conditions specific to the climate,” says Rajan Rawal, coordinator, Centre for Advanced Research in Building Science and Energy at CEPT University in Ahmedabad. In one of his studies Rawal highlights that without thermal comfort standards customised for Indian climatic conditions, air-conditioned office buildings in India operate at 22.5 (± 1°C). Consequently, mechanical systems have to use massive energy to cool temperatures down from 42-45°C to 21-22°C.

“Well conditioned spaces encourage people to work longer and more productively,” says Bhargav. However, a 2004 Cornell University study highlights that uneven airflow in cooled buildings often leaves some people shivering and others sweating in corners, thus affecting their performance at the workplace.

“For almost three months all I did was sneeze and cough throughout the day,” smirks Zubaan Syed, an aspiring architect. “After living in Puducherry for a year without any ACs my body got rude shocks everywhere in Delhi where ACs were always on. Doctors made me undergo all kinds of expensive tests and prescribed a host of medicines, but nothing seemed to be working,” he adds.

The Indian AC market, however, seems to be in good health. According to a study by the Associated Chambers of Commerce and Industry of India, the room AC market in India was estimated at 4.2 million units in 2011 and was valued at Rs 7,200 crore. The demand for ACs is shifting from big metropolitan cities to medium and small cities. “The residential segment is growing rapidly at the rate of 8-9 per cent, with greater demand for spilt ACs,” says Bhargav. A growing number of Indian and international studies highlight the perils of excessive air-conditioning on human health. Chhabra cautions that a sedentary air-conditioned lifestyle could cause obesity, cardiovascular diseases and psychological infirmities. A preliminary study done by a team of doctors from various medical colleges in India found the frequency of respiratory symptoms like coughing, wheezing and breathlessness was higher among AC users.

“Now that summer is back with ACs roaring on maximum, I am afraid that my problems may reappear,” says Syed. “Maybe this time I will carry a jacket and a cap around.”