Engine for the future 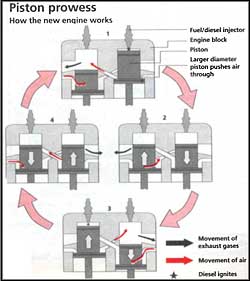 IN DISHEVELLED Second World War buildings in the countryside west of Birmingham, UK, Bernard Hooper is working through the problems of developing a new diesel engine for small cars for the 21st century. He is trying to develop a 2-stroke engine with a stepped piston design which would achieve low exhaust emissions and low fuel consumption but high durability with no diminution in performance for the new generation ultra-small, lightweight cars.

Hooper believes that the contemporary small, high revving, 4-stroke diesel engines fitted to cars will prove too heavy and big for the new generation cars. These engines are heavier than their petrol counterparts because their block and cylinder head has to withstand chamber compression ratios almost double those of a petrol engine.

Add valves, camshafts and the camshaft drive components needed on any 4-stroke engine, and it would require a genius to fit all these into the bonnet of ultra-small cars of the future- In addition, diesel engines are facing difficulty in meeting the tighter exhaust emission standards planned for later this decade, which would inevitably require the use of an exhaust catalyst. Hooper argues that all these problems can be overcome by the 2-stroke engine with a'stepped piston design, which he is trying to develop.

The stepped piston is a simple fabrication that includes a small number of individual components. It has 2 diameters, the smaller being a normal piston that is used in conventional 2-stroke engine. The larger diameter section at the bottom of the piston acts as the compression piston. (see diagram)

The intake charge is drawn into the annular space controlled by reed valves, which close and open automatically. The intake is. charged through transfer ports into the combustion chamber of the other cylinder sucking in the exhaust gases in the process. This continues until the exhaust ports are closed by the rising piston and the compression begins.

Hooper's technology might prove interesting to car makers because of several reasons. One is the very fact that it is a 2-stroke engine - this dispenses with the valve gear, its weight, size and other associated penalties. Second, Hooper's engine provides twice as many firing strokes as a 4-stroke engine, thereby giving a smoother and a more powerful performance.

And finally, it is the Hopper's extraingredient - the stepped piston design - that could get over the age-old problem with the conventional 2-stroke engines, that is unacceptably high emissions of oxides of nitrogen. Says Hooper, "The Achilles heel of the 2 stroke engine is that all fuel goes through the crank case. Since you carmcm separate the lubrication from combus tion, so the oil ends up in the exhaust The stepped piston engine separates the lubrication from the combustion - thus reducing emission problems."

Hooper, formerly the chief designer with the UK-based Villiers Engineering. is not the only one exploring alternative combustion technologies and engine concepts. But what makes Hooper different from others is the fact that he is among the few who are trying to develop engines with a genuine comparative advantage over petrol and diesel units. The idea itself is not new. In fact, it dates back to the First World War years, but like many othef alternative engine concepts, it remained undeveloped for all these decades.