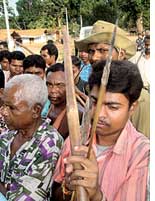 on april 15, 2008, the supreme court ordered the National Human Rights Commission to appoint a committee to look into human rights violations by Salwa Judum activists in Chhattisgarh and submit a report within eight weeks of the order. At a hearing on March 31, the bench comprising Chief Justice K G Balakrishnan and Justice Aftab Aslam had said that there could be no objection to an independent enquiry into Salwa Judum.

The court order came in response to two petitions. The counsels for the petitioners, Ashok Desai and T R Andhyarujina, said Salwa Judum was a state sponsored vigilante force that was responsible for extreme violence in Dantewada and Bijapur districts in the state, and for forcing people into camps. Independent reports of the National Commission for Protection of Child Rights and the Administrative Reforms Commission have, in the past, talked about the violation of fundamental rights in such camps.

"The order is welcome. It has a bearing on the accountability of the state and is very important considering villagers have been displaced and forced to migrate," said Ramesh Sharma of Ekta Parishad, an organization working on community governance. Although Ramvichar Netam, the state's home minister, says he is prepared for the enquiry, he insists there should be a neutral and unbiased enquiry. "Such reports are extremely negative. The villagers living in relief camps have come on their own and they know they are safe," he said.

The bench also noted that the government policy on Salwa Judum amounted to endorsing vigilantism and such lawlessness could not be tolerated. But Vishwa Ranjan, director-general police, Chhattisgarh, said, "Special police officers are well trained and assist the police to fight Naxals. They are well within the law."