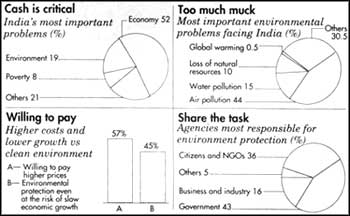 ALMOST half of India's urban population is in favour of protecting the environment "even at the risk of slowing down economic growth" as against one-fourth who feel that economic growth should be the topmost priority.

This is the major finding of an all-India survey conducted recently by the Indian Institute of Public Opinion (IIPO) among adults in 70 urban centres. A majority of the respondents said they were concerned about environmental degradation because it affected their health and felt that it imperiled future generations. Over 56 per cent of the 5,000 respondents were even willing to pay higher prices for the goods they bought, if the producing industry paid more attention to environmental protection.

A little over one-fourth of the respondents claimed that they had avoided using certain products they felt were harmful to the environment in the previous year, while about 20 per cent said that they had voted or worked for candidates in elections because of their positions on environmental issues.

With respect to thevarious environmental problems facing the world, about 48 per cent people felt that water pollution was a very serious problem, while about 42 per cent were more concerned about degraded air quality. At the global level, most Indians felt that air and water pollution, loss of rain forests and jungles and loss of plant and animal species were the most important problems. About 38 per cent people interviewed found the greenhouse effect and the loss of ozone in the upper atmosphere to be serious.

Among causes, about 75 per cent felt that overpopulation was the biggest threat, followed by an equal number who laid the blame on overconsumption by industrialised nations. About 70 per cent felt that multinational companies contributed "a fair deal" to environmental degradation. About 43 per cent people found both the industrial and developing nations equally responsible for ecological degradation.

A large number -- 92 per cent -- favoured stringent environmental protection laws for business and industry, while an almost equally large number felt that there should be laws for all citizens to protect the environment. Only about 43 per cent assigned primary responsibility for environmental protection to the government. Over one-third (36 per cent) felt that it was a must for independent citizens' groups to be associated with protection activities, if they were to succeed. But the ministry of environment and forests should be thrilled. Nearly 80 per cent of the respondents believed that the government is doing a fair amount and more.