Rapid industrialisation poses a threat to the Arctic region 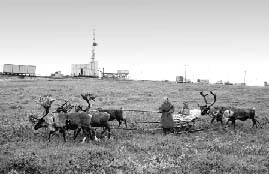 At least 80 per cent of the Arctic will be damaged by 2050, if industrialisation continues at current rates, claim scientists of the United Nations Environment Programme (UNEP). Activities such as mining, oil and gas exploration and construction of roads are threatening the Arctic's rich and abundant wildlife, with birds and larger mammals such as reindeer, caribou, polar bears, wolves and brown bears at the highest risks. These are the findings of unep's global methodology for mapping human impacts on the biosphere (GLOBIO), which for the first time has analysed the cumulative impacts of human activities on the environment.

"At the turn of this millennium, less than 15 per cent of the Arctic's land was heavily impacted by human activity and infrastructure. However, if exploration for oil, gas and minerals, developments such as hydro-electric schemes and timber extraction continue at current rates, more than half of the Arctic will be seriously threatened in less than 50 years," says Klaus Tpfer, executive director of unep.

Studies of more than 100 species show that some Arctic animals will suffer as the region becomes industrialised. The Arctic birds will suffer due to the drainage of wetlands for development and increase in noise pollution from vehicles.