Over 6.5 million people have suffered the impact of land conflicts across India, according to a report released on February 28, 2020 by Land Conflict Watch (LCW), a research institute. More than 3 million of these were affected by infrastructure projects — including road projects and real estate projects— across India.

The report — based on research conducted in three years — identified 703 ongoing land conflict cases spread across 21 lakh hectares (ha) of land and Rs 13.7 lakh crore “committed, earmarked, and potential” investments tied up in 335 of these conflicts.

Most number of people affected by real estate

Within the subset of infrastructure projects — which affected 31,13,257.6 people — the highest number of conflict cases were reported in township or real estate projects (68 conflicts), according to the report.

In this subset, the second most number of conflicts were reported in road projects (63), with plantations (51) and protected areas (44) having the third and fourth most conflicts.

Infrastructure projects pertaining to the railways (22) had the second least number of conflicts, while the least were reported in tourism-related projects (19).

Mining affects most people after infrastructure

Approximately 8,52,487.6 people — the second-most number of people — were affected by land conflicts related to mining projects.

Of the total documented land conflict cases, the most — 43 per cent or 300 cases — were under infrastructure projects.

The second-most number of cases —15 per cent or 105 cases — were related to conservation and forestry projects.

The third-most number of cases were documented in land use projects, with 14 per cent or 101 cases.

While land conflict issues related to mining affected the second-most number of people, the least number of cases —45 or just 6 per cent — were documented in this sector, according to the report.

The spread of 703 land conflicts across sectors 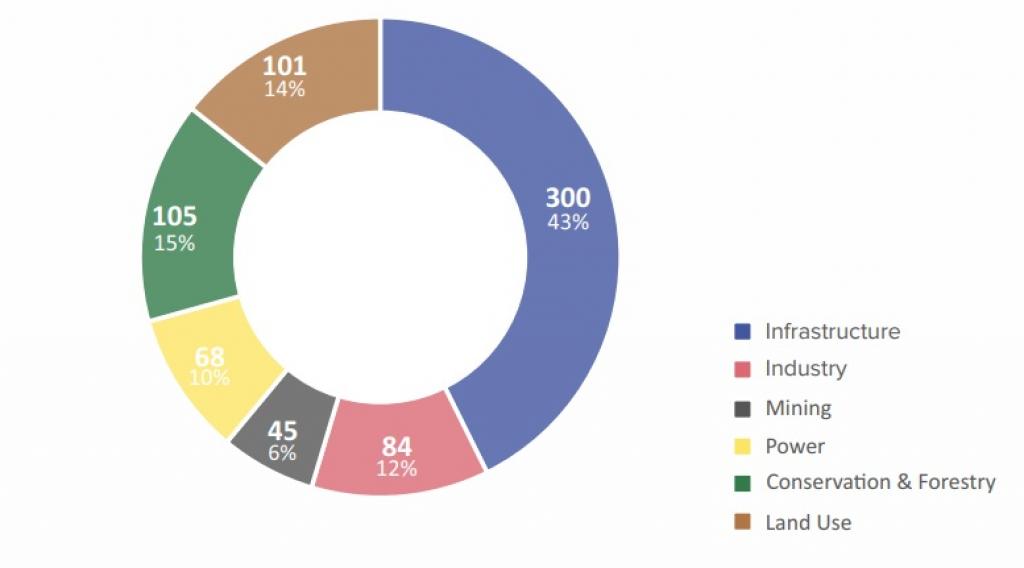 Of the total documented land conflict cases, the most — 43 per cent or 300 cases — were under infrastructure projects Photo: Land Conflict Watch

More than 10,000 affected by land conflict on an average

On an average, 10,688 people were affected by each land conflict, according to the study.

The averages did not take into account cases that did not have data on the field for which the average was calculated.

Land conflict was defined as "any instance in which two or more parties contest the use of, access to, or control over land and its associated resources", according to the report.

These conflicts permeate across India’s rural and urban areas.