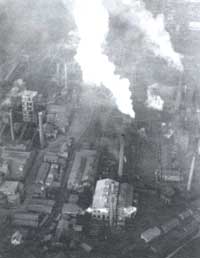 IF SIGNIFICANT changes in the development policies of east Asian countries do not come about, each country will suffer serious damages from global warming, acid rain and local air pollution, among others; and it is the environmental NGOS in this region that should lead the way to initiate these changes. With this agenda in mind, the Atmospheric Action Network of East Asia (AANEA) held its second meeting in Osaka, Japan, this March and adopted an action plan of mutual cooperation. The AANEA, formed last year to network environmental NGOs, now consists of 19 groups from China, Korea, Hong Kong, Mongolia, Far East Russia, Taiwan and Japan.

It is for the first time that such cooperation was established among the region's NGOS. At the meeting, guest speaker Lando T Velasco of the Southeast Asian Climate Network pointed out that east Asian nations have a great influence on global climate, due to the region's growing contribution to greenhouse emissions resulting from its various economic activities.

In 1990, the average per capita carbon dioxide emission in the region was 6.7 metric tonne - well above the per capita sustainable emission of 1.69 tonne. Velasco also stated that the region's very long coAtline makes it very vulnerable to sea-level rise, thus endangering millions of people inhabiting the coastal areas and affecting the infrastructure and economic base of east Asian countries.

Hye-Sook Park, assistant professor at Mie University in Japan, predicted that emissions of sulphur dioxide will double by AD 2010 in this region if the nations do not alter their development and environment policies. However, reportedly, east Asia is the only place in the world where regional cooperation among nations is very sparse as they happen to be very diverse.

The Chinese presence in the meet was significant. Said Zhang Haz-Bin, assistant professor at Beijing University, "In China, the Central government dominates everything. People tend to think that it is the government, not they themselves, that deliberate policies, so they do not show any concern for environmental issues. But as you can see, China is on the road to democratisation, environmental NGOs have started their activities and the government has begun to recognise them."

Ts Aduaysuren of Mongolia reported that the climate of Mongolia was becoming drier and the mean temperature has actually increased by 1.8'c in the mountains due to forest felling in China. Air pollution has also adversely affected humans and the environment in Khavarovsk in Far East Russia, where infant mortality in 1992 stood at 18.2 per 1,000 new-bornbabies.

In Hong Kong, the atmospheric particulates are reported to be far above the acceptable levels. Respiratory diseases among children is 1.5 times higher than those in non-industrial areas. Except for Japan and a few other countries, little has been done to slow down the emissions of greenhouse gases.

During the second meeting of AANEA, apart from member nations, delegates from the Philippines, Bangladesh, Fiji and Germany attended as guests. The meeting adopted the AANEA action policy which recommends monitoring of air pollution by NGOS in this region using simple instruments; AANEA also plans to send a delegation to the Conference of Parties (cop)-2 for the Geneva climate talks this July to strengthen cooperation between east Asian NGOS to prepare for the COP-3 next year in Japan.