While India announces a new formula to assess pollution levels in industrial clusters, it shies away from addressing the core problem of how to prevent an area from getting polluted 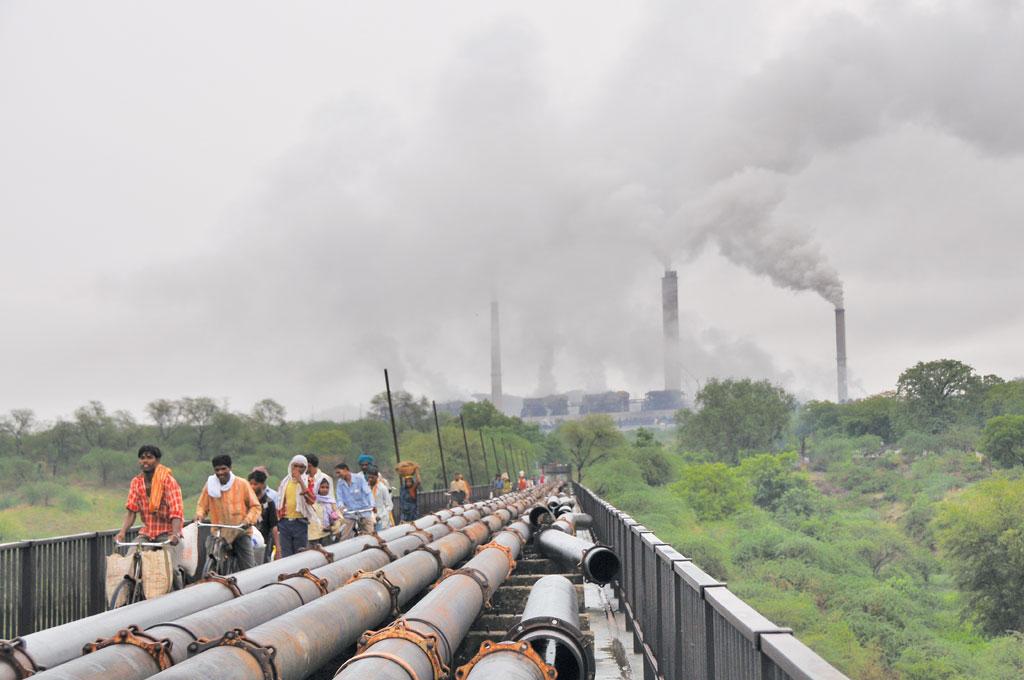 The Central Pollution Control Board (CPCB) is all set to monitor over 100 polluted industrial areas in India using a new formula. A revised version of the existing comprehensive environmental pollution index (CEPI), the formula is, however, unlikely to help clean the polluting clusters. The reason: the issue was never with the formula, but with the agency’s failure to penalise the polluting industries. As a result, the polluting clusters continue to flourish.

In 1989, CPCB for the first time identified 24 critically polluting areas (CPAs). It then rolled out a slew of measures to arrest the pollution levels. In 2009, it came up with another CPA list, using the CEPI formula. By then, the number of industrial areas in the list had gone up to 43. The new list also had 18 of the CPAs identified in 1989, suggesting things had worsened in the 20 years despite the anti-pollution measures.

Similarly, it has been nearly eight years since CEPI was introduced, yet no significant improvement is seen in the pollution level of the CPAs. In 2010, CPCB put a blanket ban on expansion and new industrial setups in all the 43 CPAs. But within a year, the ban was lifted because of pressure from industry lobbies. “CEPI did not bring significant change as the ban was removed without any improvement on ground,” says Rohit Prajapati, an environmental activist from Gujarat. He adds that top CPAs such as Vapi and Ankleshwar in Gujarat are as polluted today as before.

“The monitoring authority did not involve local stakeholders to understand the improvement on ground and just believed the action plan and reports of the industries, which are normally cooked up,” says Prajapati. His allegations are not unfounded. Currently, just four of the 43 CPAs are banned from any further expansion of industry and industrial setups and they are not even the most polluting ones in the list.

While Ankleshwar, the most polluting CPA in the 2009 list, continues to operate with a pollution score of 80.93 in 2013, Jodhpur, which has the CPA ban on expansion, had a pollution score of 78. Meanwhile, Vapi, the second-worst CPA in 2009, has today become more polluted than Ankleshwar at 85.31 per cent (see ‘It keeps on getting worse’).

Even the current revisions to the formula have been introduced because of the industry lobby, which has criticised CEPI for being “subjective” in its assessment. In the revised formula, indicators such as evidence of adverse impact on people and eco-geological features have been removed because the information on these issues was collected from media and research reports, and non-profits. Now, only adverse health effects of pollution will be monitored based on data collected from three to five hospitals every two years.

Core of the problem

Experts say the government’s priority is misplaced. CEPI is just a post mortem approach, in which the authorities take notice only after an industrial area is critically polluted. The fundamental challenge is not how to monitor pollution levels better, but how to stop pollution arising in the first place. This can be done by strengthening the environmental clearance process for industrial projects.

The government should first undertake a zoning atlas study of the country involving the preparation of a district-level atlas based on administrative divisions, physical features, land, climate, environment and water quality, water availability and flow pattern. It will give the government a blueprint of where developmental works can be undertaken and how much is the pollution-absorbing capacity of these places. Based on the area’s available resources and sensitivity to pollution levels in air and water, possible and alternative sites for specific industries can be decided. Such a study was done by Puducherry in 1988.

In 1995, CPCB started a district-wise zoning atlas for the country. The programme was discontinued in 2008 because it failed to deliver due to lack of resources. “Even the states have failed in the zoning atlas study due to lack of adequate capacity,” says R P Sharma, former chief of environment and health at Tata Steel. 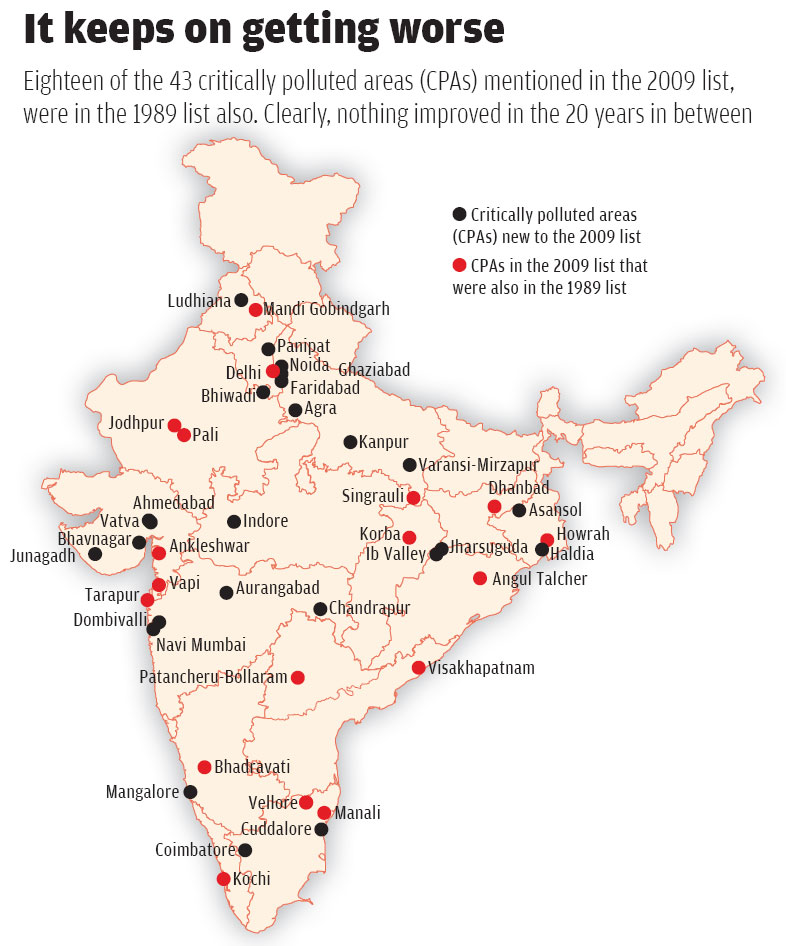 With a broad map in place, the government should next revisit its Environmental Impact Assessment (EIA) process, which has been in place since 1994. The objective of EIA is to predict the environmental impact of a project, finding ways to reduce it, shaping the project to suit the local environment and presenting the predictions and alternatives to the decision makers. Although a strong legal and regulatory structure is associated with the EIA framework, it is perceived as just a bureaucratic requirement. The biggest problem with the current EIA framework is that it gives nod to a project based on only the assessment of its individual environment footprint. As a result, the government gives environmental clearances to several projects in the same area, each project individually within the pollution levels. But the overall impact of all the industries goes beyond the capacity of the area leading to excessive pollution like in the CPAs.

EIA lacks the systematic approach for cooperation of different players, which is especially important in big projects. Spatial planning should, instead, be the way forward. It involves developing a project at the district or regional level.

"Germany has successfully standardised the process to develop its master plan in harmony with the environment, involving all the players and experts on the district, regional and national level," says Georg Jahnsen, an urban and land use planning expert from GIZ, a German development agency. Not just Germany, the United States of America, Canada and even Japan have adopted a spatial or area-based planning after they faced problems similar to what India is facing currently.

Ideally, India should replace the existing EIA framework with the Cumulative Impact Assessment (CIA) approach. It accounts for the environmental, social and biodiversity impacts of not only the proposed industry but also other developmental projects that were, are and may likely be present in the concerned area. Since the cumulative approach takes care of all the industries and other project activities in the area, it helps better assessment of pollution and resource availability and leads to appropriate mitigation measures to avoid the resource strain and excessive pollution. A few CIA studies have been conducted in India, but most of them have happened because of judicial intervention. For instance, in the 2012 case of 'T Muruganandam and Anr v MoEF' about the construction of a coal-based thermal power plant in Tamil Nadu’s Cuddalore district, the Supreme Court ordered a CIA study.

Before giving environmental clearance to any developmental project, the government should carry out a carrying capacity study of the area. Such a study identifies the supportive capacity (available resources) and assimilative capacity (pollution bearing capacity) of an area. It provides a physical limit to economic development and aims at finding the maximum level of industrialisation without affecting the available resources and exceeding the pollution carrying potential of the area. The study can also suggest suitable and preferred business scenarios for the area considering all possible trade-offs like changes in technology, environmental systems, control on expansion or banning the project. The process involves detailed analysis of available resources, baseline environmental data, management plan, business as usual and preferred scenario and also indicates impact mitigation plan to ensure a sustainable development.

India has carried out studies of zoning atlases, carrying capacities and CIAS on an experimental basis. The government now needs to amend the existing legal framework, develop proper guidelines and protocols to carry these studies. It also needs to develop a centralised system for data handling, improve coordination between relevant departments and build capacity of stakeholders. These improvements can be a major win. The biggest question that remains: will the government adopt the right approach, or continue ignoring the environment for the sake of unfettered development of the country?

This story was first published in the July 16-31, 2017 issue of Down To Earth magazine