The Union government has issued notices to over 2,000 'polluting' units 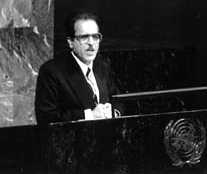 Saifuddin Soz, the Union minister for environment and forests announced on August 19 that more than 2,000 polluting industrial units across the country had been issued closure notices. He added that all the "polluting units" will have to shut down in the first week of November unless they can show that they have installed effluent treatment plants according to prescribed guidelines. But industries with genuine problems would be given a grace period, he explained.

The names of the culprit units were withheld by the ministry of environment and forests. The minister added that the names would be made public in a week's time. Soz had attended a series of meetings with chairpersons of various state pollution control boards earlier in the day.
A state-wise list shows that as many as 1,961 of the units in question are from Tamil Nadu. As for the question of unemployment resulting from the closure of the units, Soz said that he would address the problem as it comes. He added that it was easy enough for industries to make the required rectification as World Bank funds were available for industries that wanted to install common effluent treatment plants. The state governments have also been asked to provide financial assistance, he pointed out.