Mutations in bacteria may eventually disappear, but this should not be seen as weakening the case of antibiotic resistance, say doctors 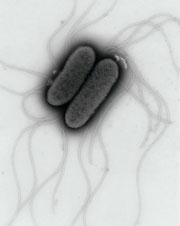 Spread of epidemics in modern times is usually associated with resistant pathogens like bacteria. A study released this week challenges this view, saying that pathogens develop resistance only temporarily. It suggests that it is environmental change, rather than evolution of pathogenic bacteria, which is responsible for spread of epidemics.

Doctors, however, disagree with this. They say it is true bacteria can develop and lose resistance, but that it's a slow process, and meanwhile these resistant bacteria can harm infected patients badly.

The study, published in journal PNAS and authored by scientists from United Kingdom and France, analysed DNA sequence of 149 strains of Salmonella enterica serovar Paratyphi A—a bacterium that causes typhoid. The bacterium emerged about 450 years ago and its seven lineages have spread globally since mid-19th century. Mutations in the lineages temporarily increased robustness of the bacteria because of their ability to resist drugs. But in the long run, they were adversely affected and such bacteria gave way to the others.

As a result, the Paratyphi A genome did not change dramatically over the centuries. According to the authors, the findings suggest that recent increase in frequencies of bacterial diseases might be due to environmental changes rather than the evolution of pathogenic bacteria.

The Indian sub-continent is host to lineage A and C of Paratyphi A. The research included 42 genomes from India and 12 from Pakistan. South Asia is one of the worst hit by Paratyphi A, and hence typhoid. Resistance to drugs like flouroquinolones, has emerged as a major problem in treating patients.

Note of caution
"What the paper suggests can be scientifically true. Bacteria develop resistance, and they lose it too," said Chand Wattal, chairperson, department of clinical microbiology, Sir Gangaram Hospital, Delhi. He, however, cautioned that this should not be seen as weakening the case of antibiotic resistance among these bacteria.

"Once the doctors stop giving these antibiotics to patients to which the bacteria has developed resistance, then eventually the bacteria loses that resistance. But it is a long drawn process. It took 18 years for Salmonella enterica serovar Paratyphi A to lose resistance to certain drugs. We cannot wait for this long to treat patients," said Wattal. He added that doctors are still scared to give conventional drugs because they had bad experiences in the past.

It is to be noted that no new antibiotic has come in the market since 1980. If the existing drugs become ineffective, for which there is ample evidence now, then people can die of diseases that seem treatable today, including mild typhoid.