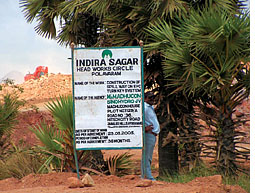 Much to the Andhra Pradesh government's dismay, the National Environmental Appellate Authority has quashed the environmental clearance for the state's multi-crore Indira Sagar Project, formerly known as the Polavaram Irrigation Project.

In a historic ruling on December 19, the authority for the first time took into consideration the fact that the project flouted rules set for carrying out an environmental impact assessment (eia) and denied information to the affected people. "It is evident that no public hearing was conducted in the affected areas of Orissa and Chhattisgarh. Neither did the affected persons have any access to the executive summary of the project in the notified place nor did they have any opportunity to participate in Public Hearing and express their view on the environment impact of the environment of the area," the bench said while annulling the environmental clearance. Construction on the multi-purpose project, worth Rs 9,000 crores, started in early 2005 after it received environmental clearance from the Union Ministry of Environment and Forests see 'Interstate dispute', Down To Earth, September 15, 2006).

In January 2006, R Sreedhar from the Academy for Mountain Environics, New Delhi, filed an appeal against the environmental clearance arguing that the eia carried out for the project was inadequate. The inter-state project, involving Andhra Pradesh, Orissa and Chhattisgarh, will displace 3,000 families from Orissa and Chhattisgarh.

"The eia rules mandate public hearing for all affected people, but the Andhra Pradesh government did not follow it," says Ritwick Dutta, counsel for the petitioner. Ravi Rebbaparagada of Samata, a Vishakapatnam-based ngo that has been fighting against the project, says the judgment is a positive one, but the Andhra Pradesh government has already evicted villagers in the West Godavari and East Godavari districts.

The Andhra Pradesh government now plans to file an appeal against the order in the high court.