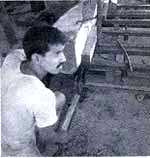 MORE than 400 saw mills in Orissa, out of 600, may be closed if the Orissa Saw Mill and Saw Pit Act, 1990 -- which disallows the existence or operation of such units within 10 km of a forest -- is carried through. Although the Act was framed in 1990, new rules to prevent rapid deforestation in the state were incorporated in November, 1993, galvanising the state forest department into action. The department has already served notice upon 8 saw mills in the Mayurbhanj, Dhenkanal, Khurda and Puri districts.

Saw mill owners have started agitating against this "alarming" show of environmental teeth. About 2,700 entrepreneurs dependent upon wood products staged a rally outside the state assembly in Bhubaneshwar on April 5. Speaking on behalf of the Orissa Wood-based Industries Council, Satya Swain, secretary general of the Orissa Assembly of Small and Medium Enterprises (OASME), warned, "If the government does not change the offending rule of the Act by the end of the month, we will launch a statewide agitation." He accused the state government of favouritism, alleging that the restriction was not applicable to the Orissa Forest Development Corp or other state government agencies.

However, state forest officials government are unfazed. Says an official, "We are expecting political pressure to backtrack, but we are going ahead and will serve notice on at least 60 other mills by May."