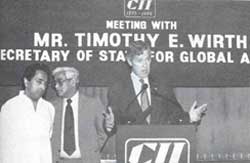 TRADE concerns inevitably win over environmental imperatives: that's how most observers cynically view the common agenda for environment signed between India and the us on April 18, despite the us undersecretary of state for global affairs, Timothy Wirth's emphasis that his government would not use environmental issues as a lever for coercing trade benefits. At its best, the step is being seen as paving the way for the export of environment-friendly technology from the us, and providing it with a watchtower to help it protect its patent rights in India.

The agenda, which was signed by Wirth and Vinay Shankar, additional secretary in the ministry of environment and forests (MEF), comes at a time when both countries occupy opposite goalposts on most global environmental issues.

These differences, along with America's dismal environmental record, seemed to support the sceptics. But the Union minister for environment, Kamal Nath, sought to dispel misgivings: "The agenda is an attempt to find and build on common grounds while attaining a common goal, thereby increasing understanding, even though many important areas of disagreement remain." The agenda brings to India's doorstep modern technology, information and management techniques from the US.

Japan is the only other country with which the us has signed a similar intent, and Wirth said that this signifies just how high on the list of priorities India was for the his country. However, a senior official, requesting anonymity, held that this gives the US a chance to break into the huge Indian market and outrun Japan and Germany in the lucrative transfer of technology. There are also chances that joint ventures and partnerships would put paid to the reverse engineering India is so famous for, especially in the pharmaceuticals industry.

India is also fretting over the US's refusal to ratify the biodiversity convention. Says an anxious Kamal Nath, "We remain deeply concerned at the delays and signals by the us government in ratifying the convention. While we are willing to go along on the issue of intellectual property rights, we cannot have a situation where there is no protection of biodiversity."

The signing of the intent is likely to kick off a series of workshops, lectures and studies. NGOs, private institutions, and various chambers of commerce and industry are expected to be involved in the preliminary partnerships, which would eventually help shape the policies.

The agenda, said us officials, warrants the efficient use of available funds, mobilising of additional funds from existing and new sources, and supporting the implementation of India's Environmental Action Programme by "picking the best business brains from the US".

"One of the major achievements in America was the reduction of the quantity of lead in the air to natural levels in the metros by the introduction of lead-free petrol...we feel that you could learn from our experiences and not repeat the same mistakes," said Wirth.