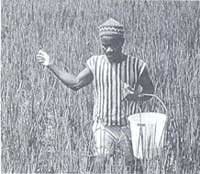 THERE is a growing interest worldwide in synthetic substitutes for enzymes -- substances produced by living organisms that catalyse or speed up certain chemical reactions in their bodies -- which can save energy required for several industrial processes.

Recently researchers J K M Sanders, Mary McPartlin and their colleagues from the University of Cambridge in the UK developed a new synthetic molecule, which when modified could lead to a promising set of synthetic enzymes (Nature, Vol 368, No 6467). The modified molecules, says scientist Leonard F Lindoy from James Cook University in Queensland, Australia, can speed up reactions like Diels-Alder -- one which occurs both in natural physiological systems and is an essential step in many chemical synthesis reactions -- by as much as 6,000 times.

The molecule developed by Sanders and his co-workers is a polymer formed from cyclic compounds of carbon, nitrogen and zinc. It has a cage-like structure, within which the substrate -- the substance on which an enzyme works -- molecules can be accommodated. The team has plans to modify this new molecule to control its catalytic activity.

Experts point out that the development of synthetic enzymes is in its infancy. Although they believe this field is promising, they caution that synthetic enzymes are less specific to particular substrates, than natural enzymes. But adds Lindoy, often for industrial manufacture, catalytic efficiency is more important than specificity.

While natural enzymes are unstable compounds that are highly sensitive to parameters such as temperature, synthetic analogues being developed are relatively simple molecules that can withstand vigorous industrial procedures. Moreover, these synthetic enzymes, experts point out, unlike natural enzymes that are available in limited amounts because they warrant tedious biochemical extraction from living species, can be produced easily, depending upon the need.

Most synthetic enzymes possess a cage-like molecular structure that allows the enzyme and reactant molecules to couple chemically. Several groups are investigating crown ethers -- a class of cyclic hydrocarbons containing oxygen atoms and cyclodextrins, large carbohydrate molecules with a cyclic structure -- for catalytic activity. The 60-carbon-atom fullerene molecules, better known as buckyballs, are also being investigated for potential catalytic activity.