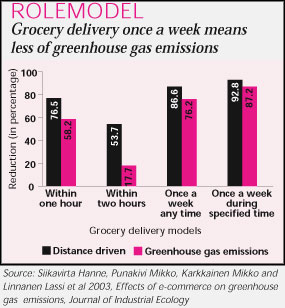 Electronic grocery shopping, whereby customers place their orders via the internet, has a potential to reduce emissions of greenhouse gases (ghgs). A research done in Finland shows that emissions decreased by 87 per cent in the study area (Helsinki) when groceries were bought online, as compared to the general situation -- customers using their vehicles or the public transport system to visit the shops.

They used four different home delivery models to prove their hypothesis. Model one and two required somebody to receive the goods when delivery was made within one and two hours respectively. As per the third and the fourth model, groceries were put in a freezer placed in the customer's garage or any other convenient place. In the third model, delivery could be made anytime; but as per the fourth model, delivery was made once a week between a specified time. The researchers found that the last model was the best. It resulted in maximum reduction of the emissions, since orders could be sorted out by postal codes and thereafter divided methodically for the delivery.

The researchers admit that energy consumption of the refrigerating units and computers will also lead to emissions. However, these emissions would be very less as compared to those of the transport sector.