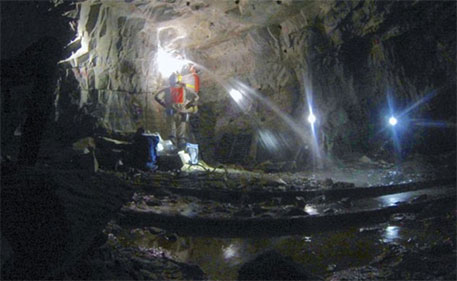 Scientists say that the world’s oldest water, found deep under Earth’s surface, could be holding more water than the volume of all of the world’s rivers, swamps and lakes put together.

They estimate that there could be around 2.5 million cubic miles (11 cubic million km) of this water buried beneath the ground. The ancient water is said to be viscous like maple syrup but tastes “terrible”.  The study was published in Nature.

A team, led by the University of Toronto’s Barbara Sherwood Lollar, has mapped the location of hydrogen-rich waters in Canada, South Africa and Scandinavia. The water was found trapped kilometres beneath Earth’s surface in rock fractures.

The researchers collected samples of water trapped inside the Precambrian shield rocks, which is considered to be the oldest rocks in the Earth's crust, from 19 different mine sites in Canada, South Africa and Scandinavia. Such Precambrian rocks make up around 70 per cent of the Earth's crust, according to the study.

The scientists found that the water was reacting with the rock to release hydrogen which means the deep crust could be harbouring life.

The oldest water that was discovered 2.4km down in a deep mine in Canada has been dated to between one billion and 2.5bn years old.

Sherwood Lollar said the hunt for life in the deep crust was now a priority.  She was quoted by the BBC as saying, “This is a vast quantity of rock that we've sometimes overlooked both in terms of its ability to tell us about past processes—the rocks are so ancient they contain records of fluid and the atmosphere from the earliest parts of Earth’s history.” “But simultaneously, they also provide us with information about the chemistry that can support life…And that’s why we refer to it as ‘the sleeping giant’ that has been rumbling away but hasn’t really been characterised until this point.”