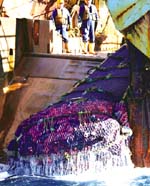 the eu countries recently came together to discuss deep-sea fishing quotas, but ended up in a row. At the meeting, the International Council for Exploration of the Sea (the official scientific body that advises the eu on fish stocks) asked the participatory nations to ban fishing in some of the deep-sea areas. The decision created friction among the 25 nations.

The northern European nations argued hard to save Europe's deep-sea fish from extinction and wanted to follow scientific advice to ban catches of tusk, blue ling, orange roughy and black scabbardfish. They faced strong opposition from Spain and France, who after exploiting their high sea stocks have now turned to deep-water fishing.

The meeting thus decided to keep the quotas at 2005 levels, except deep sea sharks and orange roughy, whose quotas will be reduced by 25 per cent.The meeting also decided on fishing techniques, equipments and methods of monitoring fisheries. Ministers agreed to increase net mesh sizes, use satellite technology to track illegal fishing vessels and substitute traditional logbooks with the electronic versions.

According to the eu fisheries commissioner Joe Borg "The agreement reached on deep sea stocks will lead to effective protection for vulnerable deep sea species while giving the fleet's concerned time to adapt to the necessary constraints on their activities."