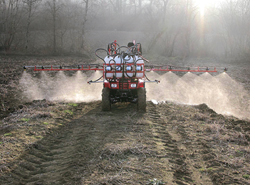 on june 13, members of the European parliament voted against diluting a law to regulate toxic chemicals and pesticides in its surface and groundwater. The move has pre-empted an attempt by industry pressure groups to make the law non-binding and let individual European states handle it. The draft directive sets a single limit for these toxics for the European Union (eu).

"Stopping the most harmful chemicals from getting into groundwater, the source of drinking water for two-thirds of eu citizens, cannot be left to national discretion. We are glad the parliament maintained its tradition of fighting for enforceable and eu-wide legal requirements in eu environmental law and opposed the council's laissez-faire attitude," says Stefan Scheuer, policy director of the European Environment Bureau (eeb).

On May 22, the eu parliament had voted in favour of increasing the number of toxic chemicals present in the surface and groundwater--regulated by eu.

Environmental groups see red over the exemptions that the law allows. Any chemical or pesticide, which has been authorised by eu for a specific use, is exempted. "This is a loophole that will allow pesticides and industrial carcinogenic chemicals to continue polluting ground and drinking water," eeb says.

"Results are mixed. By 2020, the marine environment should be virtually poison-free, in line with the Water Framework Directive and international agreements. The parliament is also introducing provisions for emissions restrictions for certain polluters and for critical exemptions like navigation," says Sebastian Schnauer of Friends of the Earth-Germany. Parliament has also upgraded a number of chemicals, including sunscreen ingredients, to a higher category of toxicity, which means member states will have to phase-out their use by 2015.