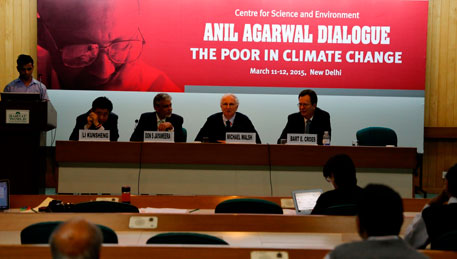 The Euro V emissions standard, notified in 2009, may have been a mistake, experts said at the Anil Agarwal Dialogue 2015, an annual event organised by Delhi-based non-profit, Centre for Science and Environment.

Ray Minjares, who led the programme on Clean Air for International Council of Clean Transportation (ICCT), an international think tank, said that European emission standards had failed to take real-world emissions into account.

Minjares also had a suggestion for India. He said the country should look at improvising the existing Bharat II, modelled on European emission standards.

According to ICCT, several shortcomings in emissions regulations were revealed since Euro V standards were adopted in 2009 in the EU. “For heavy-duty vehicles, Euro V standards have not achieved the hoped-for reductions for NOX [nitrogen oxides] emissions. While Euro V standards have resulted in dramatic reduction in particulate matter (PM), emissions from light-duty diesel and real-world diesel NOX emissions have continued to far exceed certification limits,” the organisation’s briefing paper stated.

It added that countries following the European emission standard with Euro IV have suggested that they should directly switch over to Euro VI. This will be binding on vehicles in Europe from September 1, 2015. The Euro VI norms were notified on September 1, 2014.

On the other hand, Euro VI has set a limit for particulate matter emanating out of a heavy-duty vehicle. “Euro VI lowers both NOX and PM limits ... The standard also overhauls the testing procedures to better represent real-world driving conditions, broadens the set of pollutants considered and strengthens durability,” the briefing paper said.

Minjares added that a new pilot standard for emission was being tested, which would take into account real-world driving experience. “By fixing portable emissions measurement system (PEMS) in cars, there is a move to find ‘normal’ conditions. We want to know if it is ‘normal’ to drive through the French Alps in sub-zero temperatures or driving through the streets of Rome be the new ‘normal’ to determine test conditions by which emissions could be measured, along with the efficiency,” he said.

According to experts Euro VI can be compared to Low Emission Vehicle 2 norms of the United States of America.

According to vehicle technology expert from the US, Micheal Walsh, his country is becoming the new hot spot for emission standards. “Beijing has already tied up with California so that it implements these standards in its own city,” Walsh said.